While other tech giants fund housing initiatives, Amazon is opening a homeless shelter — inside its HQ 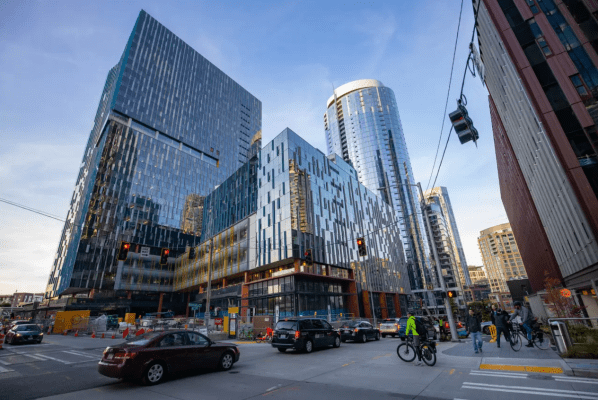 As big tech gets bigger, industry leaders have begun making more noise about helping homeless populations, particularly in those regions where high salaries have driven up the cost of living to heights not seen before. Last January, for example, Facebook and the Chan Zuckerberg Initiative, among other participants, formed a group called the Partnership for the Bay’s Future that said it was going to commit hundreds of millions of dollars to expand affordable housing and strengthen “low-income tenant protections” in the five main counties in and around San Francisco. Microsoft meanwhile made a similar pledge in January of last year, promising $500 million to increase housing options in Seattle where low- and middle-income workers are being priced out of the city and its surrounding suburbs.

Amazon has made similar pledges in the past, with CEO Jeff Bezos pledging $2 billion to combat homelessness and to fund a network of “Montessori-inspired preschools in underserved communities,” as he said in a statement posted on Twitter at the time, in September 2018.

Now, however, Amazon is taking an approach that immediately raises the bar for its rivals in tech: it’s opening up a space in its Seattle headquarters to a homeless shelter, one that’s expected to become the largest family shelter in the state of Washington.

Business Insider reported the news earlier today, and it says the space will be able to accommodate 275 people each night and that it will offer individual, private rooms for families who are allowed to bring pets. It will also feature an industrial kitchen that’s expected to produce 600,000 meals per year.

The space is scheduled to open in the first quarter of the new year and is part of a partnership Amazon has enjoyed for years with a nonprofit called Mary’s Place that has been operating a shelter out of a Travelodge hotel on Amazon’s campus since 2016.

The new space, which BI says will have enough beds and blankets for 400 families each year, isn’t just owned by Amazon but the company has offered to pay for the nonprofit’s utilities, maintenance, and security for the next 10 years or as long as Mary’s Place needs it.

BI notes that the shelter will make a mere dent in Seattle’s homeless population, which includes 12,500 people in King County, where Seattle is located. But it’s still notable, not least because of the company’s willingness to house the shelter in its own headquarters.

It’s a move that no other tech company of which we’re aware has taken. The decision also underscores other cities’ equivocation over where their own, growing homeless populations should receive support.

In just one memorable instance, after San Francisco Mayor London Breed last March floated an idea of turning a parking lot along the city’s Embarcadero into a center that would provide health, housing services, and stays for up to 200 of the city’s 7,000-plus homeless residents, neighboring residents launched a campaign to squash the proposal. It was later passed anyway.

Vox noted in report about Microsoft’s $500 million pledge that many of these corporate efforts tend to elicit two types of reactions: either admiration for the companies’ efforts — or frustration over the publicity these initiatives receive. After all, it’s hard to forget that Amazon paid no federal tax in the U.S. in 2018 on more than $11 billion in profit before taxes. The company also threatened in 2018 to stop construction in Seattle if the city passed a tax on major businesses that would have raised money for affordable housing.

Whether Amazon — one of the most valuable companies in the world, with a current $915 billion market cap — is doing its fair share is certainly worthy of exploring in an ongoing way. The same is true of every tech company that’s ‘eating the world.’

Still, a homeless shelter at the heart of a company like Amazon is worth acknowledging — and perhaps emulating — too.

“It’s all of us working together.”

Pictured above: A view of the new Mary’s Place Family Center from the street, courtesy of Amazon.