Archbishop Wilton Gregory used his new visibility as leader of the Washington DC archdiocese to slam Donald Trump, suggesting recent comments by the president were motivated by racism.

In his first public statement since his installation, Archbishop Gregory — the only African American Catholic archbishop in the country — went after Trump by name, echoing recent criticism by Democrat leaders of the president’s remarks concerning Rep. Elijah Cummings (D-Md).

“I fear that recent public comments by our President and others and the responses they have generated, have deepened divisions and diminished our national life,” the archbishop declared Thursday in the Catholic Standard, expressing his “sadness and deep regret for the ways our Maryland neighbors in Baltimore have been denigrated in recent public attacks.”

Mr. Trump had called Rep. Cummings “a brutal bully” for “shouting and screaming at the great men & women of Border Patrol about conditions at the Southern Border, when actually his Baltimore district is FAR WORSE and more dangerous.” 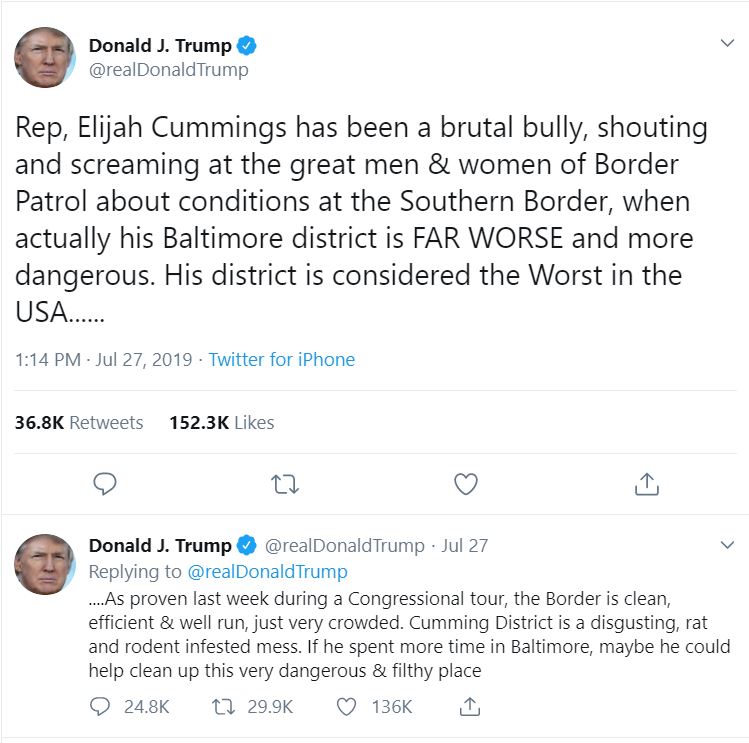 In his statement Thursday, Archbishop Gregory suggested that the president’s remarks had racist overtones.

“Our faith teaches us that respect for people of every race, religion, gender, ethnicity and background are requirements of fundamental human dignity and basic decency. This include newcomers to our country, people who have differing political views and people who may be different from us,” he said.

“We all need to reject racism, disrespect or brutality in speech and action,” he said, adding that “racism occurs when we ignore the fundamental truth that, because all humans share a common origin, they are all brothers and sisters, all equally made in the image of God.”

“We must all take responsibility to reject language that ridicules, condemns, or vilifies another person because of their race, religion, gender, age, culture or ethnic background,” the archbishop said.

Curiously, nothing in Mr. Trump’s statements mentioned the race of Rep. Cummings, but apparently — in the archbishop’s opinion — the very fact of his being black should make him immune to criticism.

“As an American, a Christian, a Catholic pastor, I pray that our President, other national leaders and all Americans will do all we can to respect the dignity of all God’s children and nothing to further divide our nation. The growing plague of offense and disrespect in speech and actions must end,” Gregory concludes.

One cannot help but wonder whether flinging charges of racism at anyone who takes issue with the actions or statements of a person who happens to be black truly advances the national unity that the archbishop claims to champion.