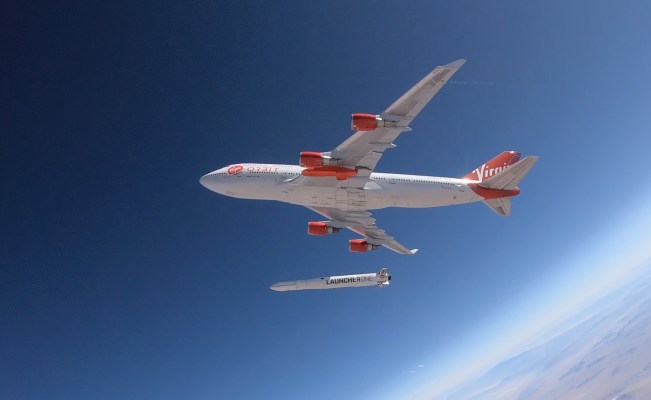 VOX Space, the Virgin space subsidiary dedicated to government launches, has scored a valuable new contract with the U.S. Space Force and is about to move from testing to full operations, the company announced today.

The Space Force contract is for three launches and is valued at $35 million. The company will be launching payloads for the Defense Department’s Space Test Program-S28, a set of technology demonstrations in low Earth orbit. More than 36 satellites will be launched, “enabling advancements in space domain awareness and communications and informing future developments of the USSF space architecture.”

Those launches, like others planned for the U.K. and Israeli governments, aren’t exactly imminent; VOX is still in the testing phase, but expects to put payloads into orbit come 2021. (I’ve asked for more information on this and will update if I hear back.)

VOX and Virgin Orbit differ from most other launch providers in that their launch vehicles consist of a rocket strapped to the belly of a 747. This promising but unproven technique could enable a highly mobile and responsive launch infrastructure, taking off from pretty much anywhere with a runway.

After years of engineering and tests, Cosmic Girl (that’s the plane) and LauncherOne, the rocket stage that will take the payload to orbit, are almost ready for their debut.

The company is planning one last rehearsal in the form of a “cryogenic captive carry flight,” in which everything is almost exactly as it would be during a real launch, including supercooled liquid in the rocket’s fuel tanks, but they stop short of detaching and firing the rocket’s engines. The full burn and first orbital payload will be saved for the Launch Demo, which is planned for later this year.

Of course, the global pandemic hasn’t made things easy on the company. In a blog post signaling readiness for the next test, the company explained:

As the pandemic reached our home in California, we sent all of our staff home with full pay, giving them a week to prepare for the many changes that were to come for them and their families — and giving ourselves all the time we needed to design an entirely new way of working.

We reconfigured our Mission Control. We re-wrote procedures for our technicians on the shop floor and at the test site in order to meet social distancing requirements. We were already accustomed to using Personal Protective Equipment during many of our operations — but now we are ramping up our standards to match the latest guidelines from the CDC and other leading medical experts. And of course, we are spending extra time regularly sterilizing every square inch of our manufacturing facility, constantly educating our staff, and much more.

With a robust plan for safe operations in place, we began bringing essential teammates back on site — but continue to have as much as 90% of our staff working remotely.

As is the case for many industries, existing plans are being hugely disrupted and timing is up in the air, so to speak. But expect to hear more about VOX’s final tests and first commercial launches soon.