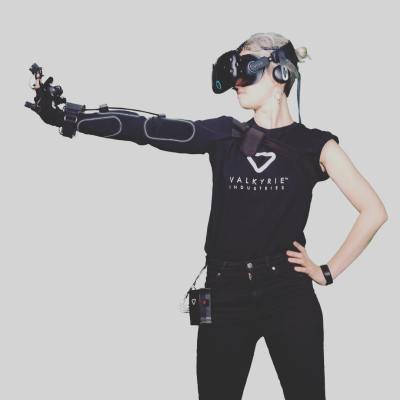 Valkyrie Industries off-handedly refers to the current iteration of its VR suit as “Iron Man v. 1.” It’s a fitting reference. There’s a very “first half of the superhero film” vibe to the prototype. There are exposed wires everywhere and large, clunky 3D printed pieces that clip onto various body parts. In a more finalized version, it will probably look like something more akin to a wetsuit. For now, however, the wearable haptic product looks like a bit of steampunk cosplay.

We met with the London-based team at the Brinc accelerator in Hong Kong. I admit to being a bit wary at first mention of a haptic body suit for VR. We’ve seen a number of wearables throughout the years designed specifically to offer a more immersive gaming experience. Among the key places Valkyrie sets itself apart, however, is target market.

Rather than targeting the fairly limited world of VR gaming, however, the startup has its eyes on professional applications. This technology will almost certainly be cost prohibitive for the foreseeable future, making it something of a nonstarter for a majority of home users (the bill of materials for the current version is somewhere in the neighborhood of $1.5k). Big companies, on the other hand, would like be far more willing to invest in a technology that could simplify and streamline the training process, particularly for dangerous and otherwise complex positions.

The system utilizes electrical impulses to stimulate muscles, approximating resistance and touch. With the product still very much in the early stages (the three-person company is currently seed funded), we were unable to actually try out the product.

But Valkyrie has already demoed the product for a number of high profile companies and government industries, who are interested in the product for both training purposes and potential teleoperation, giving wearers the ability to control and manipulate objects at a safe distance.

‘Doom’ and ‘Doom II’ are free for some Chromebook owners

Criterion will stream notable titles by black filmmakers for free