UPS introduces hybrid, long-range trucks that change modes based on where they are 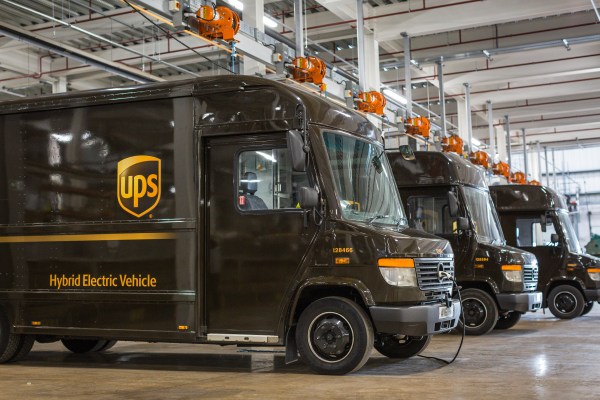 UPS is introducing 15 new vehicles to its U.K. fleet that offer extended driving range versus traditional EVs, but that are also capable of operating in fully electric mode when required to do so, as in emission-free zones and dense city cores. The trucks, developed in partnership with commercial electric vehicle tech startup Tevva, can switch between hybrid and fully electric modes for a total range of up to 400km (~250 miles), with the same cargo carrying capacity of same-sized, diesel-powered trucks.

The trucks can operate at a much longer range than fully electric delivery trucks, which typically top out at around 60 miles of range. They can also switch between modes to stay fair of local transportation bylaws. This is especially helpful where they’re rolling out in Birmingham and Southampton in the UK, since Birmingham will introduce a clean air zone to block non-electric commercial vehicles in its city center by sometime next year.

UPS has already made use of electric delivery vehicles, but the range of its existing trucks meant they couldn’t make the trip from central depots to in-city drop-off points in every case. Plus, this hybridized solution will be able to carry a lot more packages than the fully electric trucks, which should lead to fewer cars on the road overall and less congestion, according to UPS.

The crucial difference between these trucks and standard hybrid vehicles is that they’re capable of fully autonomously switching between purely electric motors and their diesel hybrid powertrains – and can do so with geofencing whenever they cross into and out of a clean air or reduced emissions regulated zone.

UPS has taken delivery of 15 of these vans already, serving customers in both Tamworth and Southampton in the UK. They’re just one part of UPS’s overall effort to decrease their emissions footprint and environmental impact.