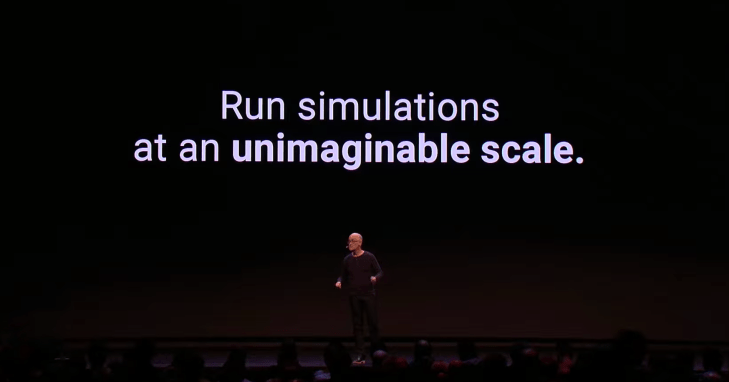 For the past several years, Unity’s valuation has ballooned alongside their public ambitions to become essential to customers beyond game developers.

One of the more interesting use cases of the real-time rendering game engine had been helping companies train their systems inside a virtual environment. This has become a key part of the workflows for robotics startups and self-driving car companies that build technologies that need to be trained repeatedly on ever-changing circumstances.

Today at the company’s Unite conference, Unity announced that they’re building a dedicated product for these use cases, called Unity Simulation. The product is currently in closed beta, but it allows customers to run simulations on cloud-connected hardware thanks to a partnership between Unity and Google Cloud.

For self-driving car companies, these simulations can help the cars build up virtual experience on roads in fringe situations that can test the technology at its limits. Robotics companies can similarly test products virtually on realistic models that haven’t even been built yet.

Larger customers had already been using Unity for these kinds of problems, but they had been doing so with their own hardware. Unity Simulation relies on Google Cloud for running these parallel tests and can make it a bit easier for small customers that want to leverage testing in virtual environments.

The product may appeal to customers outside the gaming world, but the use cases don’t exclude game studios. An example from Unity’s website details how the service can help studios quickly simulate thousands of outcomes of gameplay to help developers adjust the level of difficulty for users appropriately. For multi-player titles, a tool like this could explore whether new items or power-ups could be combined to make a single user too powerful. The service could also help studios identify how stable their title is.

Unity’s announcement comes at a sensitive time for the gaming company, which has been rocked by a sexual harassment allegation against its sitting CEO John Riccitiello filed by a former female executive at Unity. Riccitiello spoke onstage at Unity’s “Unite” conference in Copenhagen this morning, but did not address the recent lawsuit.

The startup recently disclosed it had closed a $525 million funding round at a $6 billion valuation and is reportedly targeting an IPO next year.