For many, something didn’t sit right with Rayman and Beyond Good & Evil creator Michel Ancel’s sudden departure from Ubisoft – and video game development entirely – last week, ostensibly motivated by a desire to open a wildlife sanctuary.

A new report from French daily Libération confirms that gut-feeling had more than a smattering of merit. According to the report, Ancel cultivated a toxic management style, oppressively micro-managed staff, continually shifted goalposts, discarded months of work on a whim, and habitually abused team members.

Talking to 15 employees involved in Ancel’s latest project, the seven-year-in-development Beyond Good & Evil 2, Libération discovered that Ancel was behind cases of burn-out, mental health issues, resignations, transfer requests, and what the outlet describes as ‘a profound sense of unease’ among the 150 people involved.

One person speaking to Libération offered an example:

“He’d tell you you’re a genius, that your idea is great, and then blast you in meetings by saying you’re a piece of shit, that your work is worthless, and didn’t talk to you for a month.”

As a close friend to Ubisoft CEO Yves Guillemot, Ancel commanded a privileged position, immune from scrutiny, left to work and interact with others with impunity.

The prevalence of the toxic atmosphere led to Beyond Good & Evil 2 team instating a bubble around Ancel to protect staff from what higher-ups at Ubisoft called a ‘necessary evil.’ The structure ensured only select individuals representing squads working on distinct aspects of the game had direct contact with the former creative director, notably those with long-standing relationships, to minimize exposure for less senior staffers.

The revelations bear more than a passing similarity to allegations of harassment and abuse at Ubisoft that have emerged in recent months. Ancel was reportedly the subject of one of Ubisoft’s internal investigations launched in response to the sexual misconduct scandal.

Guillemot even made Ancel aware of the investigation, raising further concerns that the CEO was all too complicit in, or at least aware, of the mounting glut of allegations about the company’s internal culture.

The threat of the revelations in Libération’s report coming to light appears to have accelerated Ancel’s departure, which has been on the cards for some time, though he denies any link. For the creative director, the scope and ambition of Beyond Good & Evil 2 were to blame for tensions and unease among the team, not his management style.

As Ancel notes in an adjacent interview with Libération:

The auteur is said to have been progressively distancing himself from Beyond Good & Evil 2 over the past year and a half, his retirement coming as a necessary change of scenery after a thirty-year stint in the industry. 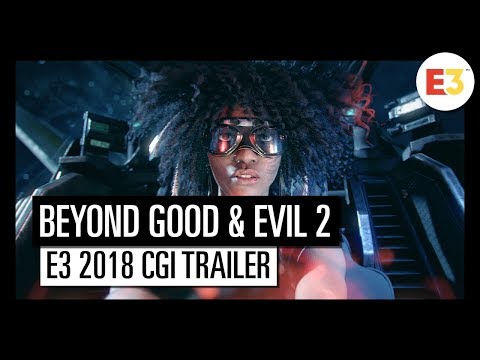 Internal tensions brought on by Ubisoft assigning in new managers – extracted from Ubisoft’s pool of frat house ‘talent’, each intent on ‘saving’ Beyond Good & Evil 2, with the ego to match – to the project saw Ancel limit his involvement to sporadic half-days, and by early 2019, scaled back to the most cursory of tasks.

Last week’s Instagram post announcing Ancel’s departure may have come across as a farewell message from one of the industry’s most-venerated old guard calling an end to a long career. The reality seemingly isn’t quite as rosy.