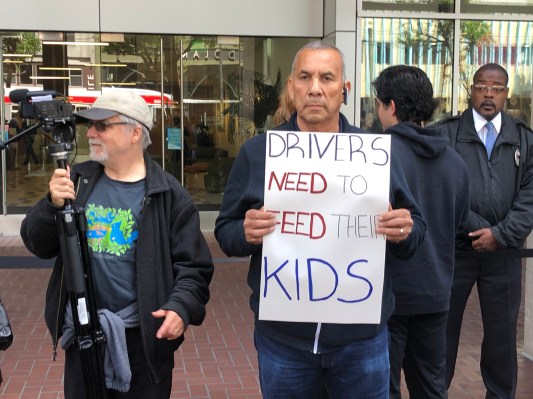 As Assembly Bill 5 makes its way through the California state legislature, Uber and Lyft drivers are voicing their demands for better pay, basic workplace protections and the right to organize through unions. Tomorrow, Lyft and Uber drivers will convene outside Uber’s San Francisco headquarters to make their voices heard.

As established in Dynamex Operations West, Inc. v Superior Court of Los Angeles, AB-5 seeks to codify the ruling. In that case, the court decided Dynamex wrongfully classified its workers as independent contractors.  AB-5, which has already passed in the California State Assembly, would ensure gig economy workers are entitled to minimum wage, workers’ compensation and other benefits.

To fuel its mission, Gig Workers Rising and Mobile Workers Alliance took out an ad in the SF Chronicle, coming out tomorrow, that features an open letter to Uber CEO Dara Khosrowshahi, and Lyft co-founders Logan Green and John Zimmer. In it, the groups applauded both Lyft and Uber for saying they want to do better by their drivers.

“But the most important step in accomplishing that goal has yet to be taken: drivers need a seat at the table as equal partners to chart our path forward,” Linda Valdivia of Mobile Workers Alliance and Rebecca Stack-Martinez of Gig Workers Rising wrote in the letter. “That is why we have been organizing, demonstrating, and speaking out to demand that you put your words into action.”

In short, drivers want to be part of the conversations around AB-5 and have their voices heard in the decision-making process. Additionally, drivers want California’s leaders to give them the ability to organize and bargain through a driver-led union, the letter states.

“It’s time for Uber, Lyft, and California state leaders to come together with drivers to chart the path forward,” organizers wrote. “It’s time for Uber and Lyft to do right by us. That means extending all drivers the living wages and basic workplace protections we deserve. It also means an end to putting the cost and the risk of doing your business on us.”

As noted in Uber and Lyft’s op-ed, neither company wants its drivers to be employees. It would be a very costly endeavor that would undoubtedly impact their bottom lines.

“Lyft is advocating for an approach in line with the interests of our driver community, by modernizing century old labor laws that make it difficult to provide both flexibility and benefits,” a Lyft spokesperson said in a statement. “That’s why we’ve been working with lawmakers and labor leaders on a different solution, so drivers can continue to control where, when, and how long they drive. It’s encouraging that more groups are joining the conversation to preserve flexibility for drivers while also providing new benefits and protections.”

Behind the scenes, Uber and Lyft have reportedly paid drivers to protest the legislation that would make them employees, according to the Los Angeles Times.

“We will continue to work collaboratively with our diverse community of drivers — and the legislators who represent them — to improve the quality and security of independent work,” an Uber spokesperson said in a statement.