Twitch launches its own free broadcasting software for Mac users 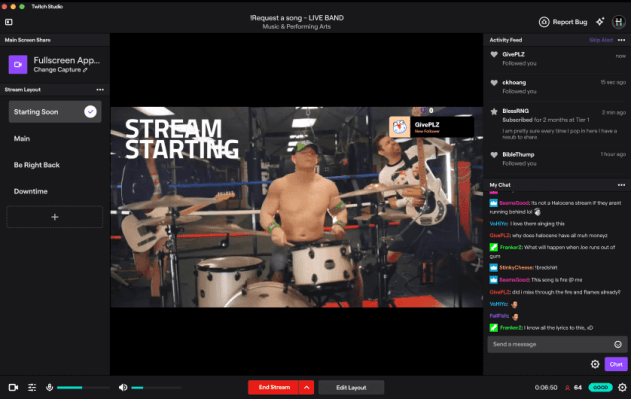 Back in November of last year, Twitch rolled out a beta build of Twitch Studio — a free, straightforward broadcasting app meant to be the first step for anyone curious about streaming on the service.

At launch, it was PC only. Today, however, they’re opening up the beta to Mac users.

Twitch is pretty open about its intended audience here; in an FAQ on the Mac beta release, they note that while it should be enough to get the ball rolling for new folks, they’re not looking to convert anyone who’s already happy with their current broadcasting setup. If you’re brand new to streaming, though, they want to walk you through it.

The app is something of a one-stop shop for the basic functionality a new streamer might be looking for on day one, wrapping into one cohesive view things like chat monitoring, an activity feed of new subscribers/followers and control of your stream’s layout.

The company also notes that the Mac version isn’t quite as full-featured as its PC counterpart, as “certain features are not possible on Mac.” The app can’t, for example, capture a game directly as it renders; instead, you’ll need to grant Twitch Studio the ability to capture your entire display. It might feel a bit hacky, but the end result should look mostly the same to viewers.

And for anyone looking to stream themselves playing some Brawl Stars or other mobile games: the Mac version of Twitch Studio can also capture feeds from an iOS device, assuming you’ve got it connected over USB.