TuSimple kicks off plan for a nationwide self-driving truck network with partners UPS, Xpress and McLane 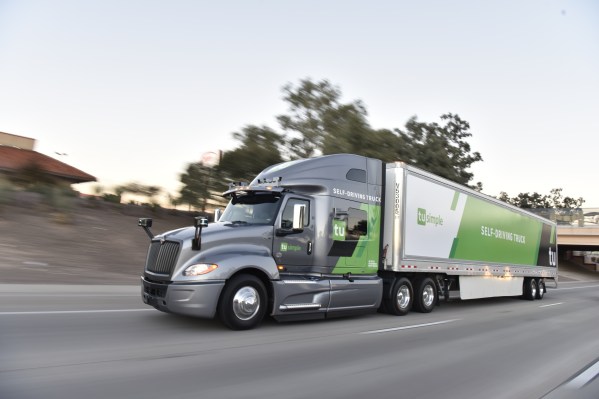 Self-driving trucks startup TuSimple laid out a plan Wednesday to create a mapped network of shipping routes and terminals designed for autonomous trucking operations that will extend across the United States by 2024. UPS, which owns a minority stake in TuSimple, carrier U.S. Xpress, Penske Truck Leasing and Berkshire Hathaway’s grocery and food service supply chain company McLane Inc. are the inaugural partners in this so-called autonomous freight network (AFN).

TuSimple’s AFN involves four pieces: its self-driving trucks, digital mapped routes, freight terminals and a system that will let customers monitor autonomous trucking operations and track their shipments in real-time. For now, TuSimple will operate the trucks and carry goods for its customers, which now number 22.  TuSimple wants to eventually be able to sell its autonomous trucks so customers can choose to operate their own fleets.

The plan was made public just days after TechCrunch learned that TuSimple had hired investment bank Morgan Stanley to help it raise $250 million. Morgan Stanley recently sent potential investors an informational packet, viewed by TechCrunch, that provides a snapshot of the company and an overview of its business model, as well as a pitch on why the company is poised to succeed — all standard fare for companies seeking investors. TuSimple, which has raised $298 million to date, has also shared its plans to build its autonomous freight network with potential investors.

“Our ultimate goal is to have a nationwide transportation network consisting of mapped routes connecting hundreds of terminals to enable efficient, low-cost long-haul autonomous freight operations,” TuSimple President Cheng Lu said in a statement. “By launching the AFN with our strategic partners, we will be able to quickly scale operations and expand autonomous shipping lanes to provide users access to autonomous capacity anywhere and 24/7 on-demand.”

TuSimple already carries freight in its autonomous trucks (always with human safety operators on board) along seven different routes between Phoenix, Tucson, El Paso and Dallas. TuSimple said it will expand its service area with existing customers UPS and McLane. U.S. Xpress is a new partner. Penske will help TuSimple scale its fleet operations nationwide and provide preventative maintenance for the self-driving trucks, the company said.

TuSimple said the network will be rolled out in three phases, starting with a focus on a service area in the Southwest where it already operates. Phase 1, which will launch in 2020 and into 2021, will cover service between cities Phoenix, Tucson, El Paso, Dallas, Houston and San Antonio. TuSimple plans to open this fall a new shipping terminal in Dallas. TuSimple said these terminals are designed to be shared by mid-sized customers. TuSimple will carry freight directly to a company’s distribution center if it is a high-volume customer.

The second phase will begin in 2022 and expand service from Los Angeles to Jacksonville and connect the east coast with the west, the company said.

The final phase will expand across the lower 48 states, beginning in 2023. The company said it will replicate the strategy in Europe and Asia after the AFN rolls out nationwide.