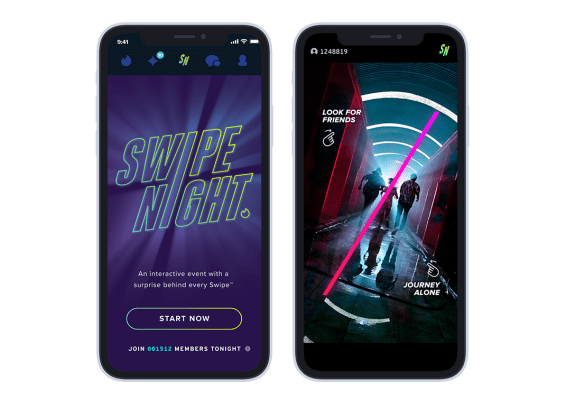 Tinder’s “Swipe Night” is going global. The dating app announced today that its interactive video series will be available in Asia and other international markets starting on September 12, giving users another way to connect as they continue to stay at home because of the COVID-19 pandemic.

As in the United States, where “Swipe Night” first launched last October, the international version of “Swipe Night” will be broadcast on on the weekend. For audiences outside the U.S., three consecutive episodes are planned, starting with the first one on Sept. 12 from 10am to midnight, and airing on consecutive Saturdays at the same time.

Similar to Netflix’s “Black Mirror: Bandersnatch” and other interactive entertainment, “Swipe Night” presents viewers with a “choose-your-own-adventure” narrative, but each of its episodes is only seven-minutes-long and users’ choices are added to their profile, giving them another way to figure out if someone is a good match.

“Swipe Night” is not the first in-app event that Tinder has introduced over the past couple of years to increase user engagement as it competes with other dating apps for younger users. Other examples, held last year before the pandemic, included Spring Break mode and Festival Mode, which helped members in the United States find other people who were headed to the same vacation destinations or events.

Now that COVID-19 has made in-person meetups less safe, “Swipe Night” has become an important part of Tinder’s business strategy as it, and its competitors, focus on organizing more virtual events and hangouts. In today’s announcement, Tinder said during stay-at-home orders and social distancing, 52% more messages have been sent through the app globally, peaking on April 5, and “swipe volume” by users under 25 (or “Gen Z”) increased by 34%.

As a user engagement experiment, “Swipe Night” proved successful enough in the U.S. to warrant a second season even before stay-at-home orders started there. When it launched last fall, Tinder’s monthly usage was climbing, but users were opening the app less on a daily basis. By the time Tinder announced the second season of “Swipe Night” in February, Tinder said millions of users had tuned into the series and matches and conversations had increased by 26% and 12%, respectively.

“When lockdowns began, we saw an immediate increase in our members’ engagement on Tinder, so we know we play an important role in their stay-at-home experience. While the global health crisis continues, we believe ‘Swipe Night’ can bring a welcome change of pace to our members around the world,” said Tinder chief executive officer Jim Lanzone in today’s announcement.

Now Tinder will find out if audiences in the rest of the world, where its competes with a large roster of other dating apps, will respond to “Swipe Night” with the same level of enthusiasm. Tinder doesn’t break down its member numbers by country, but its APAC head of communications Papri Dev told TechCrunch that more than 50% of its members worldwide are Gen Z, the main audience for “Swipe Night,” and storylines are designed to provoke conversations.

“Having a high stakes story such as an apocalyptic themed event, felt like a strong forcing mechanism to make your choices or decisions really count,” she said. “Our members who are stuck at home are hungry for content, and based on what we’ve seen take off on other platforms, people seem to be open to a wide range of tones and topics. So we wanted to make Swipe Night available to our members in Asia, and around the world, as soon as we felt it would be appropriate.”

Content in Asian markets including Korea, Taiwan, Japan, Thailand, Vietnam and Indonesia will have subtitles in local languages.