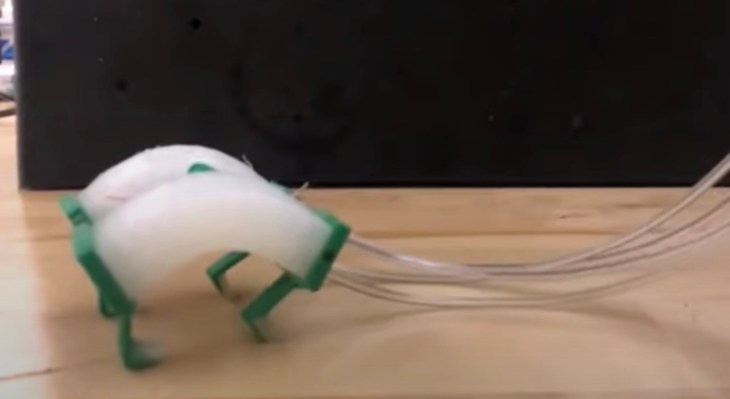 Soft robots have been a booming category for research and manufacturing in recent years, due to a number of beneficial characteristics. The field has become increasingly important to things like robotic graspers, which rely on their compliance to pick up fragile objects like fruit.

Speed, on the other hand, doesn’t tend to be a word that comes up often when discussing the category. But a team a North Caroline State is demonstrating that quick movements and soft materials need not be mutually exclusive.

The researchers have designed a quadrupedal robot that utilizes a compliant center to gallop forward, two legs at a time. It’s a fascinating bit of locomotion, as evidenced by the below video.

According to the team, LEAP can ran at speeds of 2.7 body lengths per second — that makes it around three times faster than speeds hit by the fastest soft robots. What’s more, by attaching a fin, it’s capable of swimming 0.78 body lengths a second, versus the 0.7 achieved by the last soft robot to claim top speed.

“We were inspired by the cheetah to create a type of soft robot that has a spring-powered, ‘bistable’ spine, meaning that the robot has two stable states,” assistant professor Jie Yin says in a release tied to the news. “We can switch between these stable states rapidly by pumping air into channels that line the soft, silicone robot. Switching between the two states releases a significant amount of energy, allowing the robot to quickly exert force against the ground. This enables the robot to gallop across the surface, meaning that its feet leave the ground.”

As for the part of the conversation where the researchers state real-world possibilities for the technology, that bit is still a little hazy. It’s not entirely sure how such a strange little robot could find a place for itself in the real world; the team has suggested search and rescue, along with manufacturing.

Yin adds, “We’re open to collaborating with the private sector to fine-tune ways they can incorporate this technology into their operations.”