The Kobe Bryant Law Is Too Little, Too Late for the Family & Victims

The law, which was first introduced by Assemblyman Mike Gipson, makes it a misdemeanor crime for first responders to take unauthorized photos of accidents or crime scenes.

While it’s great that AB2655 was passed, it’s too little and way too late.

Kobe Bryant Deserved Better Than This

On January 26, 2020, Kobe Bryant, his daughter Gianna, and seven other people were killed in a horrific helicopter crash outside of Calabasas, CA. While that, alone, was terrible enough, it didn’t take long for reports to begin surfacing that photos from the scene were being shared without the Bryant family being notified.

And though Sheriff Alex Villanueva confirmed, at the time, that this was indeed going on, he claimed to try to stop it by telling the offending first responders to delete the photos in question. He also said that while the LA County Sheriff’s Department had policies in place about crime scene photos, no such policies were in place for accident scene photos.

As we know, too, one such first responder shared photos of the so-called “Kobe Bryant death scene” while in a bar in an attempt to impress women. And he was only “discovered” when a bartender called the department to blow the proverbial whistle.

So while Newsom passing the so-called “Kobe Bryant Law” is a step in the right direction, it’s way too little and far too late.

Take a look at the news report about the new law below. 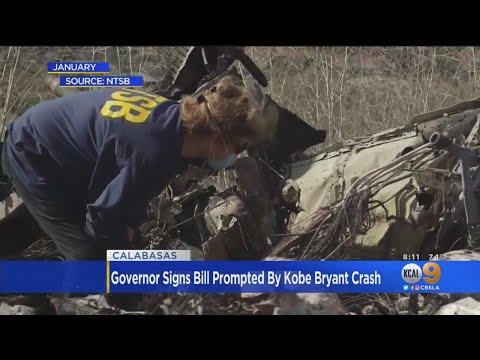 The law, also known as AB2655, was first introduced by Assemblyman Mike Gipson and made it a misdemeanor crime to share unauthorized photos of both accident and crime scenes.

But the Kobe Bryant Law only makes a violation punishable by a $1,000 fine. How is that a deterrent, especially if — for example — a publication promises tens of thousands of dollars for the exclusive photos?

The penalty needs to be far harsher than it is now. It needs to be a deterrent for anyone who would dare capitalize on any family’s grief for a quick buck. And Kobe Bryant — and all the victims of that horrific crash — deserve far better than this.