Portable consoles are hardly new, and thanks to the Switch, they’re basically the most popular gaming devices in the world. But ClockworkPi’s GameShell is something totally unique, and entirely refreshing when it comes to gaming on the go. This clever DIY console kit provides everything you need to assemble your own pocket gaming machine at home, running Linux-based open-source software and using an open-source hardware design that welcomes future customization.

The GameShell is the result of a successfully Kickstarter campaign, which began shipping to its backers last year and is now available to buy either direct from the company, or from Amazon. The $159.99 ($139.99 as of this writing on sale) includes everything you need to build the console, like the Clockwork Pi quad-core Cortex A7 motherboard with integrated Wi-Fi, Bluetooth, 1GB of DDR3 RAM, but it comes unassembled. 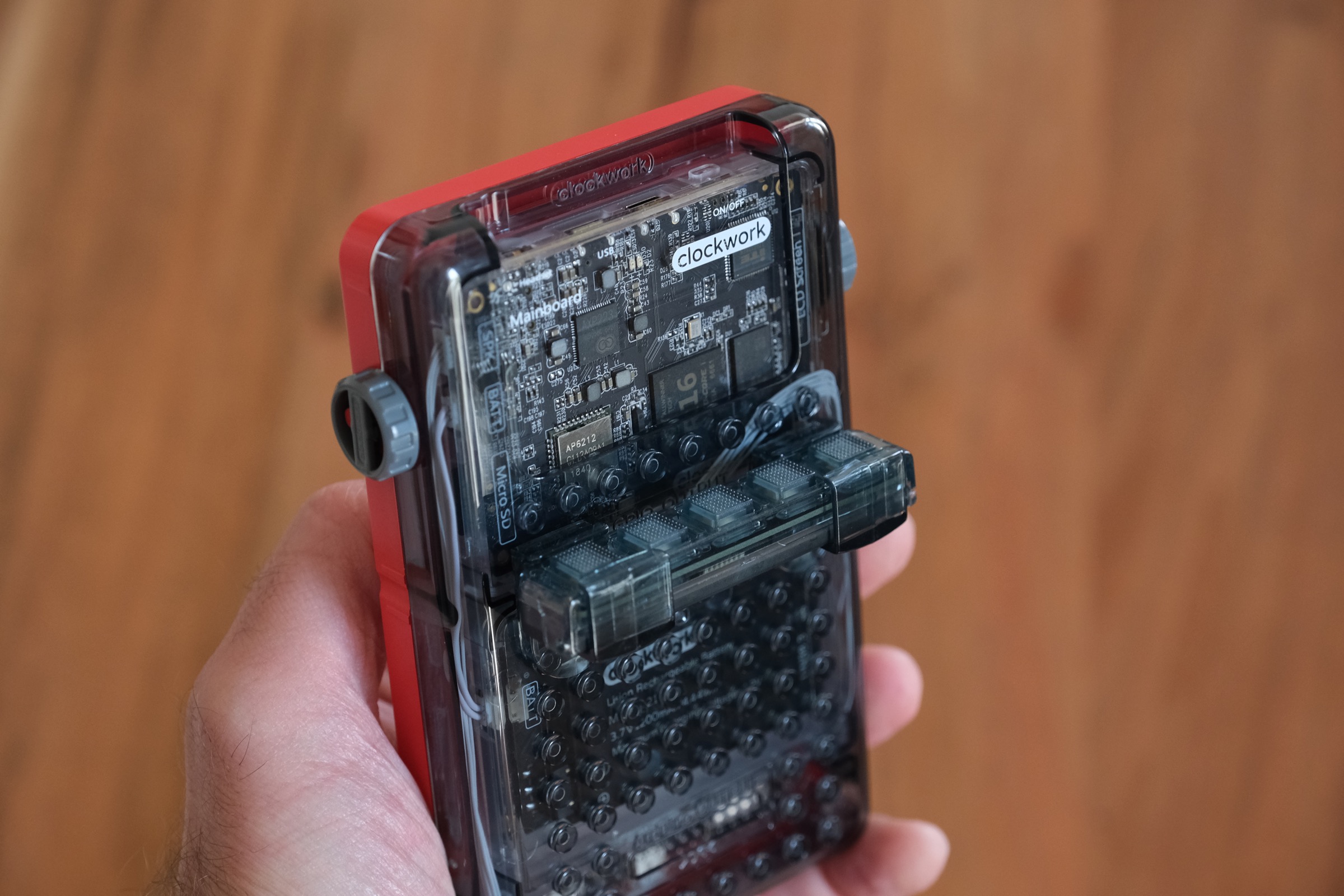 You won’t have to get out the soldering iron – the circuit boards come with all components attached. But you will be assembling screen, keypad, CPU, battery and speaker modules, connecting them with included cables, and then installing them in the slick, GameBoy-esque plastic shell. This might seem like an intimidating task, depending on your level of technical expertise: I know I found myself a bit apprehensive when I opened the various boxes and laid out all the parts in front of me.

But the included instructions, which are just illustrations, like those provided by Lego or Ikea, are super easy to follow and break down the task into very manageable tasks for people of all skill levels. All told, I had mine put together in under an hour, and even though I did get in there with my teeth at one point (to remove a bit of plastic nubbin when assembling the optional Lightkey component, which adds extra function keys to the console), I never once felt overwhelmed or defeated. The time-lapse below chronicles my enter assembly process, start to finish.

What you get when you’re done is a fully functional portable gaming device, which runs Clockwork OS, a Linux-based open-source OS developed by the company. It includes Cave Storyone of the most celebrated indie games of the past couple of decades, and a number of built-in emulators (use of emulators is ethically and legally questionable, but it does provide an easy way to play some of those NES and SNES games you already own with more portability).

There’s a very active community around the GameShell that includes a number of indie games to play on the console, and tips and tricks for modifications and optimal use. It’s also designed to be a STEM educational resource, providing a great way for kids to see what’s actually happening behind the faceplate of the electronics they use everyday, and even getting started coding themselves to build software to run on the console. Loading software is easy, thanks to an included microSD storage card and the ability to easily connect via WiFi to move over software from Windows and Mac computers.

Everything about the GameShell is programable, and it features micro HDMI out, a built-in music player and Bluetooth support for headphone connection. It’s at once instantly accessible for people with very limited tech chops, and infinitely expandable and hackable for those who do want to go deeper and dig around with what else it has to offer.

Swappable face and backplates, plus open 3D models of each hardware component, mean that community-developed hardware add-ons and modifications are totally possible, too. The modular nature of the device means it can probably get even more powerful in future too, with higher capacity battery modules and improved development boards.

I’ve definitely seen and used devices like the GameShell before, but few manage to be as accessible, powerful and customizable all at once. The GameShell is also fast, has great sound and an excellent display, and it seems to be very durable with decent battery life of around three hours or slightly ore of continuous use depending on things like whether you’re using WiFi and screen brightness.