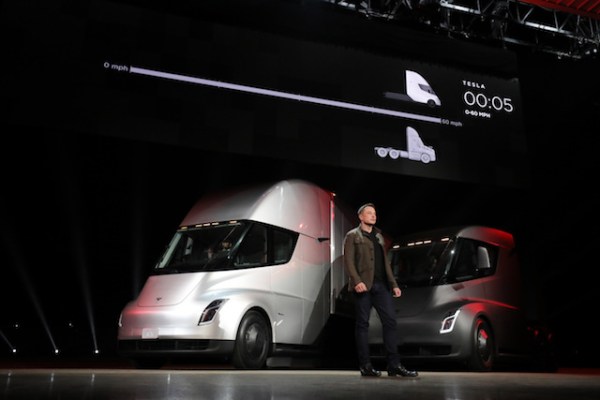 Tesla is pushing back plans to produce and deliver its all-electric Class 8 truck until 2021, the company said in its quarter earnings report Wednesday. The move puts the Tesla Semi two years behind the automaker’s previous target.

“We are shifting our first Tesla Semi deliveries to 2021,” the company said without providing any more details.

The Tesla Semi was first unveiled in November 2017 in a splashy ceremony in Hawthorne, Calif. on the grounds of Tesla’s design studio and Musk’s other company, SpaceX . During the initial debut, Musk promised the truck would drive like its other passenger vehicles, the Model X,  Model S and Model 3. The truck also boasted some eye-popping specs that included the ability to travel 500 miles on a single battery charge when fully loaded and driving 65 miles per hour.

While the company had interest from customers with companies like Walmart and Anheuser-Busch putting in pre-orders, the vehicle program wasn’t been able to meet the 2019 target.

Earlier this year in its fourth quarter earnings report, Tesla provided one of the first updates on the Tesla Semi in months, stating that it was “planning to produce limited volumes of Tesla Semi this year.”