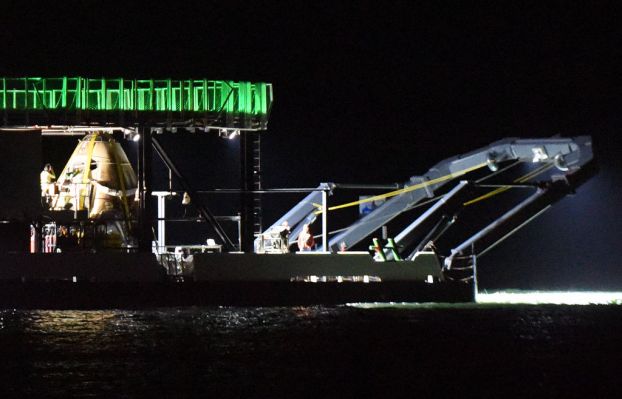 SpaceX held a press conference on Monday to discuss the results of a months-long investigation conducted by itself and NASA into an anomaly that took place during a static fire test in April. The investigation found that the “anomaly” that occurred during the test was the result of oxidizer mixing with the helium component of the SuperDraco rocket engine propellant system at very high pressure.

On April 20, SpaceX held an abort engine test for a prototype of its Crew Dragon vehicle (which had been flown previously for the uncrewed ISS mission). Crew Dragon is designed to be the first crew-carrying SpaceX spacecraft, and is undergoing a number of tests to prove to NASA its flight-readiness. After the first few tests proved successful, the test encountered a failure that was instantly visible, with an unexpected explosion that produced a plume of fire visible for miles around the testing site at its Landing Zone 1 facility in Cape Canaveral, Fla.

SpaceX VP of Build & Flight Reliability Hans Koenigsmann and NASA Commercial Crew Program Manager Kathy Lueders took members of the media through the results of their joint investigation into the cause of this anomaly. Koenigsmann explained there were identifying burn marks around a check valve in the system that’s meant to separate the oxidizer and fuel components under pressure. These check valves contain a spring that can be opened to allow flow in the direction you want the propellant components to go, but in this case a “leaky” check valve resulted in a “slug,” composed of high-pressure oxidizer, striking a titanium component that caused a very violent reaction.

Both Lueders and Koenigsmann noted that it was in many ways “a gift” that this happened during a ground test because there were many high-speed cameras to capture the incident, and it was relatively easy to comb the site and recover components to best figure out the cause of the anomaly. Koenigsmann also noted that while the team is confident in sharing these results, they are actually only approximately 80% through the investigation and there is about 20% left to do in terms of figuring out additional details, mostly around the physics involved.

Koenigsmann said that SpaceX is already implementing a crucial hardware fix for this, which is to replace the check valve with a burst valve. A burst valve completely separates the oxidizer and fuel from any pressurization liquid, which will mitigate this issue and definitely “make Crew Dragon a safer vehicle,” he said.

So far this year, SpaceX has succeeded in launching an uncrewed version of its Crew Dragon 2 spacecraft to the ISS during a mission in March, and had planned to run the first crewed test mission this July, with a mission duration of two weeks. That definitely won’t occur on that timeline, and now ongoing production of Crew Dragon craft will bump back the designated machines one generation, meaning the intended Crew Dragon 1 craft meant for crewed mission flight is now Test 2, and so on.

Asked repeatedly about timeliness, neither Koenigsmann nor Lueders would offer anything concrete, but both expressed some skepticism about managing a launch by end of year, without dismissing the possibility outright.

“There’s always the chance that we’re gonna fly crew on a SpaceX vehicle this year,” Lueders said, but continued that “right now” NASA is paying attention to all the ongoing testing of various systems and “all those things need to occur before we’re gonna be confident that the system can safely fly our crew. I hope it’s this year.”

Koenigsmann noted that this is an issue he’s fairly confident can be addressed in parallel with other things that need to be addressed with Crew Dragon before crewed flight. “I don’t think it’s impossible, but it’s getting increasingly difficult, too,” he said, when asked directly about a crewed Dragon launch occurring before the end of 2019.

Lueders ended by expressing appreciation for SpaceX’s openness with NASA and its astronauts throughout this process, and Koenigsmann reinforced the superiority of the burst valve versus the check valve it’s replacing for this application.