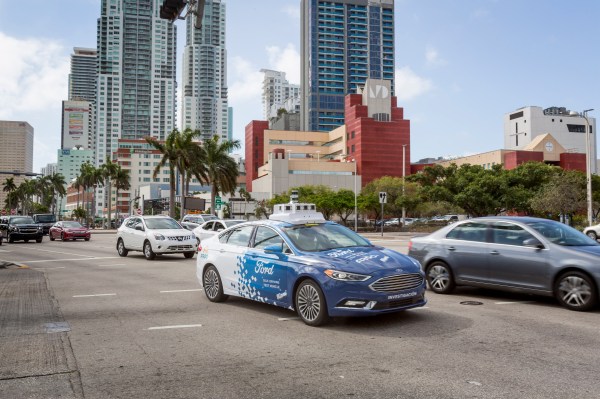 Autonomous vehicle technology startup Argo AI is valued at $7.5 billion, just a little more than three years after the company burst on the scene with a $1 billion investment from Ford.

The official valuation was confirmed Thursday nearly two months after VW Group finalized its $2.6 billion investment in Argo AI. Under that deal, Ford and VW have equal ownership stakes, which will be roughly 40% each over time. The remaining equity sits with Argo’s co-founders as well as employees. Argo’s board is comprised of two VW seats, two Ford seats and three Argo seats.

Ford’s announcement in February 2017 that it was investing in Argo AI surprised many. The startup was barely six months old when it was thrust into the spotlight. Its founders, Bryan Salesky and Peter Rander, were known in the tight knit and often overlapping autonomous vehicle industry; prior to forming Argo, Salesky was director of hardware development at the Google self-driving project (now Waymo) and Rander was the engineering lead at Uber Advanced Technologies Group. But even those insiders who knew Salesky and Rander wondered what to make of the deal.

Since then, Argo has focused on developing the virtual driver system — all of the sensors,  software and compute platform — as well as high-definition maps designed for Ford’s self-driving vehicles.

That mission now extends to VW Group as well. Ford and VW will share the cost of developing Argo AI’s self-driving vehicle technology under the terms of the deal. The Pittsburgh-based company also has offices in Detroit, Palo Alto and Cranbury, N.J. It has fleets of autonomous vehicles mapping and testing on public roads in Austin, Miami, Pittsburgh and Washington, D.C.

The investment by VW expands its workforce and operations to Europe. Autonomous Intelligent Driving (AID), the self-driving subsidiary that was launched in 2017 to develop autonomous vehicle technology for the VW Group, is being absorbed into Argo AI. AID’s Munich offices will become Argo’s European headquarters. In all, Argo now employs more than 1,000 people.

While the development and deployment of autonomous vehicles will be a long journey — a remark shared Thursday by Ford CEO Jim Hackett — the Argo investment has already provided the automaker with a short-term and timely gain.

The automaker said Thursday it netted $3.5 billion in the second quarter from selling some of its Argo equity to Volkswagen. That gain gave the automaker a one-time boost in its second-quarter earnings.

Ford posted a $1.1 billion profit in the second quarter, if the Argo transaction is counted. Ford lost $1.9 billion in the quarter before interest and taxes and one-time items. Ford reported a revenue of $19.4 billion, a 50% decrease from the same period in 2019 due to the COVID-19 pandemic which caused the company to idle its factories for weeks.

Still, the result could have been far worse. Ford had previously warned that it could post as much as a $5 billion net loss in the second quarter.

Despite these COVID-19 headwinds, Hackett said Ford is still committed to the long-term pursuit of AVs, a point reiterated by CFO Tim Stone, who said the automaker continues to make investments to commercialize its autonomous vehicle business, including product development, engineering and testing.

“The AV journey will be a long one, but Ford is now well positioned to run this race and compete like few others can,” Hackett added.