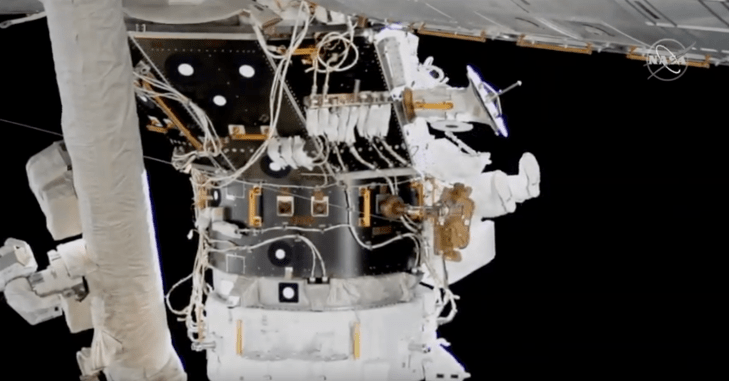 The International Space Station is now more than ready for crew-carrying spacecraft flown by commercial companies to pay it a visit: The second planned International Dock Adapter (IDA) was installed on the Space Station during a spacewalk by NASA astronauts Nick Hague and Andrew Morgan earlier today.

The dock adapter is actually IDA-3, as the first IDA was lost during the SpaceX launch failure of its CRS-7 mission on June 28, 2015. IDA-2, which was intended to be the second installed on ISS, instead became the first and was delivered in July 2016 during the SpaceX CRS-9 resupply mission.

IDA-2 has already proven effective, too: It received its first docking vehicle on March 3 of this year, when SpaceX’s Crew Dragon Demo-1 test vehicle used the automated docking procedure designed for this adapter to demonstrate how it will work eventually when crew are on board.

IDA-3 is the second working dock adapter that uses this automated procedure, which makes it so that vehicles arriving at the ISS don’t have to be caught and guided in manually by astronauts with the help of the station’s Canadarm2 robotic arm. The automated procedure is designed as an industry standard of sorts, and should mean that any commercial crew craft, from SpaceX’s Crew Dragon, to Boeing’s CST-100, and any other potential future craft, can easily and automatically dock with the ISS to transfer over passengers and cargo.

Boeing is the company that was contracted to design and build these docking adapters. Each weigh about 1,150 pounds, and they’re about 42 inches high and 63 inches wide, which means it’s a bit of a tight squeeze for crew to come through (these aren’t big step-through passageways like you sometimes see in movies).

Having both the IDAs installed on the Space Station is key milestone in the commercial crew program, but there are still plenty of hurdles left to clear — including the first test flights of commercial Crew vehicles with astronauts on board.