Say ‘so long’ to the original Segway 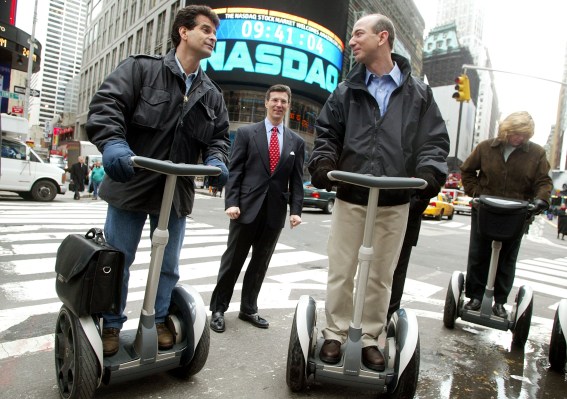 Segway’s story can’t be told without rehashing its entry onto the scene as one of the most hyped tech products of the early 21st century. Alternately codenamed “Ginger” and “IT,” the personal mobility device engendered serious conversations among futurists about the ways in which it would transform sidewalks and cities.

Nearly 20 years after its initial release, however, the two-wheeled Segway PT is done. Parent company Ninebot is ceasing production of Dean Kamen’s best-known invention, as it lays off 21 employees at its New Hampshire plant who worked on the project. As is so often the case, things didn’t go as expected.

Along the way, the Segway found some love among tour guides and cops. Certainly everyone’s favorite Kevin James film wouldn’t have been the same without it. Ultimately, the company sold about 140,000 models over the two-decade life of the product, making it, at best, a personal mobility niche.

In April 2015, the company was acquired by Ninebot. The Chinese robotics startup has continued to make all manner of personal transport devices, from standard kick scooters to an egg-shaped seated mobility product unveiled at CES. Kamen, meanwhile, has moved on to other things. Just last week it was revealed that he’s been working on engineering human organs from cells — a potentially far more transformative innovation than a self-balancing scooter.

“It was a great invention 20 years ago,” Segway VP Tony Ho told CNN. “Now it seems a bit outdated.” The executive adds that the PT currently accounts for around 1.5% of Ninebot’s total revenue.

The product was born out of Kamen’s work on self-balancing wheelchairs. At its launch, it gained praise from many tech luminaries, including Steve Jobs, who was particularly taken with the invention. It made some memorable headlines in the intervening years, including the death of British entrepreneur Jimi Heselden, whose own Segway veered off a cliff months after purchasing the company from Kamen.

Depending on who you ask, the Segway PT is a cautionary tale about the tech hype cycle or an innovative product that was just too beautiful for this world. Whatever the case, it certainly left its mark.