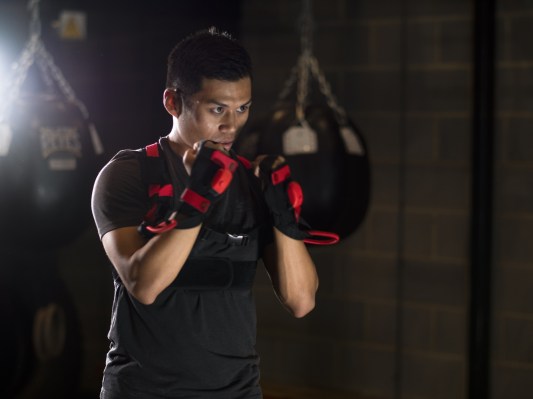 Quell is positioning itself as a kind of low-cost take on Peloton (less than 1/10th the price, it notes). You might too, if you were in the London-based startup’s place. With the stationary bike-maker’s value skyrocketing amid COVID-19 lockdowns, fitness startups are all the rage — heck, just look at Lululemon’s recent Mirror acquisition.

A more apt comparison, however, is probably Ring Fit Adventure. The Switch-based peripheral is closer to Quell in terms of pricing, scale and experience. The startup is taking a similar game-based approach to the fitness experience.

At launch, it plans to offer a first-person boxing-style game that pits you against a series of monsters on the PC, Mac and iOS (with Android compatibility down the road). What sets Quell’s approach apart, however, is the wearable resistance system. It’s basically an adjustable system of resistance bands that both simulate impact and track the wearer’s movements through a series of on-board sensors, including a gyroscope and accelerometers.

It’s still pretty early stages here. In fact, today marks the launch of the product’s Kickstarter campaign, which will be seeking a bit over $30,000 in funding, with the system going for as low as ~$182 a pop. That’s down from around $200 for the final unit — and, more importantly, includes lifetime access to all of the product’s software updates for free. Future buyers may well be subjected to a $10 a month fee for premium content.

Like a lot about the system, the subscription model is still being hammered out. “There will be a narrative story mode and quick fight mode that you’ll have,” the company tells TechCrunch. “And the subscription fee will expand the possibilities to things like local and online multiplayer, along with new expansion content over time. And there will probably be cosmetic and other upgrades to your character.”

Down the road, the system will likely expand to further gaming experiences in order to keep it fresh. Quell is also exploring the possibility of opening things up to third-party developers to create their own content for the system.

A lot of this is still hypothetical, as Quell is still an extremely small team, with four people currently working out of one of the founders’ London flat. In fact, the team only really came together in earnest in February and went full-time two months back. In spite of those humble and recent beginnings, however, the company already has the backing of Y Combinator and $10,000 in pre-orders since launching its website last month. It’s amazing how much interest in home fitness something like COVID-19 can generate.

Quell expects to start shipping the product to backers in December. Perhaps by then people will have returned to the gym. But at this rate, who knows?