The National Law Enforcement Officers Memorial in Washington, DC, was filled with people on Wednesday for a wreath-laying ceremony on the 18th anniversary of the Sept. 11, 2001 terror attack that killed almost 3,000 innocent people on American soil.

Roses and flowers were laid at the National Law Enforcement Officers Memorial in Washington, DC, on Wednesday to mark the anniversary of those lost on 911. (Penny Starr/Breitbart News)

The memorial is surrounded by a wall engraved with tens of thousands of names of fallen men and women in law enforcement, including the 72 who perished trying to save their fellow Americans on that horrific morning when radical Islamic terrorists hijacked planes and flew them into the World Trade Center in New York City and the Pentagon in Washington, D.C.

More people died on Flight 93 when passengers commandeered the jet from the terrorists and forced the plane to crash into a field in Shanksville, Pennsylvania. 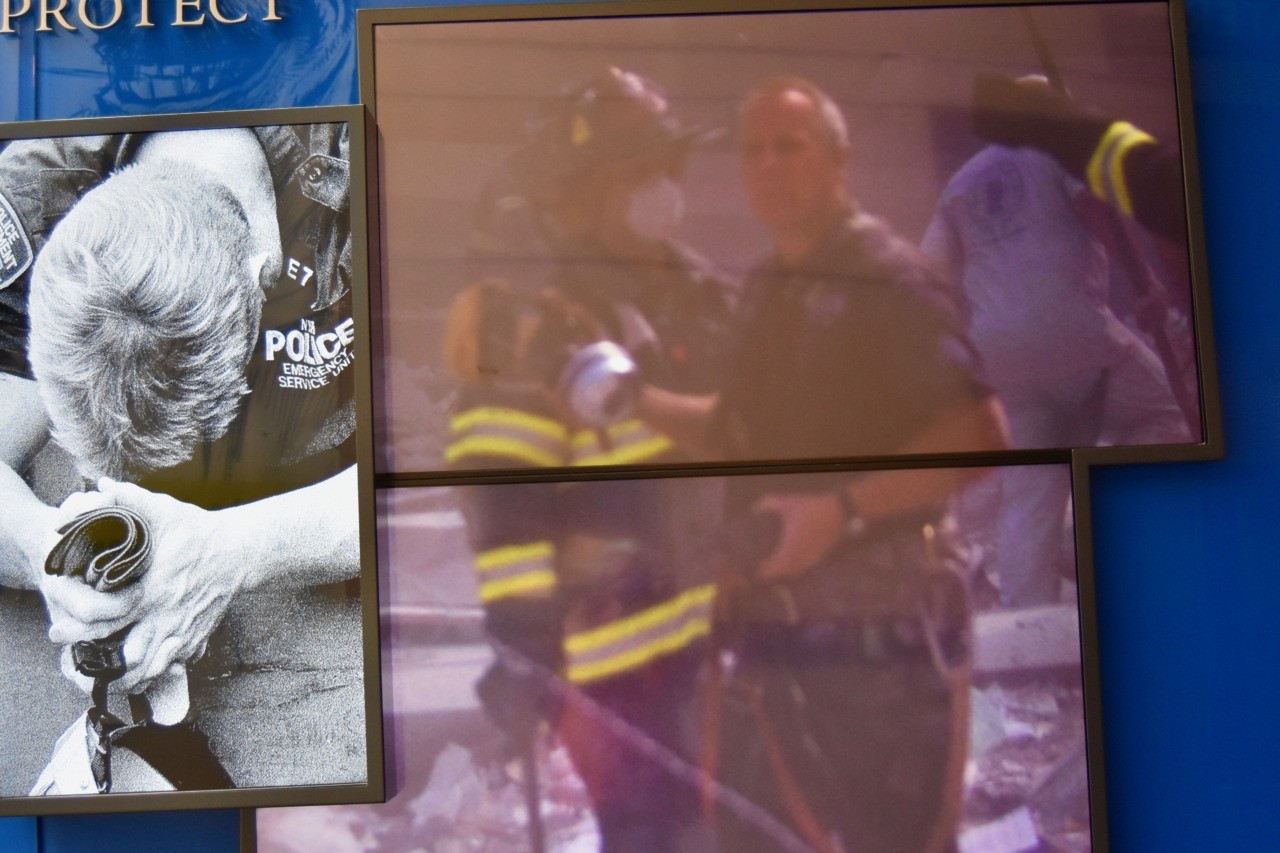 A video of 911 is part of the collection at the National Law Enforcement Museum in Washington, DC. (Penny Starr/’Breitbart News)

A banner at the ceremony tells the story of that day, “the deadliest day in U.S. law enforcement history:”

Seventy two officers were killed as a result of the terrorist attacks on America. Seventy one officers died while responding to the attacks on the World Trade Center in lower Manhattan, including 37 members of the Port Authority of New York and New Jersey Police Department, representing the single largest loss of law enforcement personnel in U.S. history. In addition, a U.S. Fish and Wildlife Service officer died in the crash of United Flight 93 outside Shanksville, Pa; it is believed he was among the passengers who attempted to retake the plane from the terrorists before it crashed. 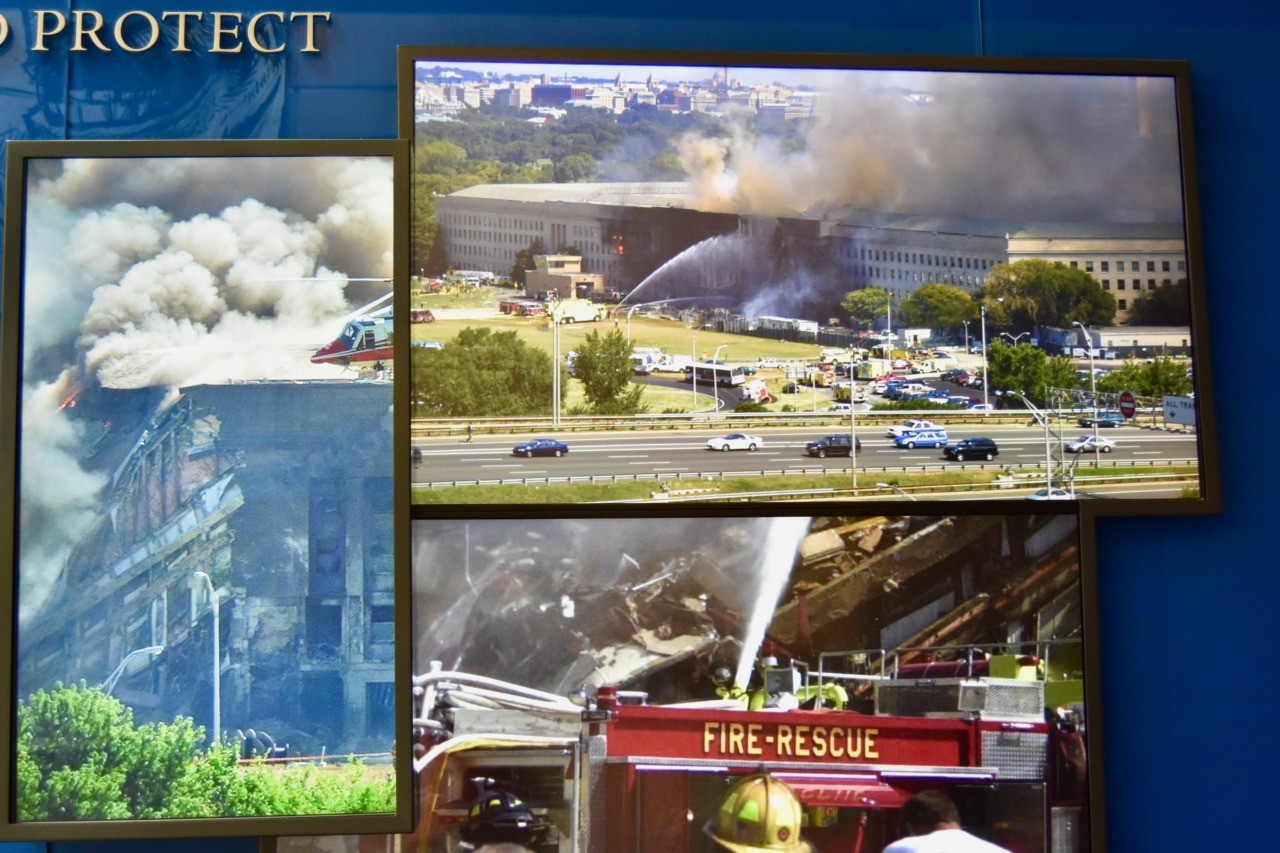 A video of 911 is part of the collection at the National Law Enforcement Museum in Washington, DC. (Penny Starr/’Breitbart News)

Speakers representing the National Law Enforcement Officers Memorial fund vowed to always remember those 72 “fallen heroes” and the 229 officers who have died since 911 “from illnesses related to their work at the targeted sites.”

Some family members who lost their loved ones on 911 attended the event, including a strapping young man who lost his dad on that day when he was nine and who is now a U.S. Marine. 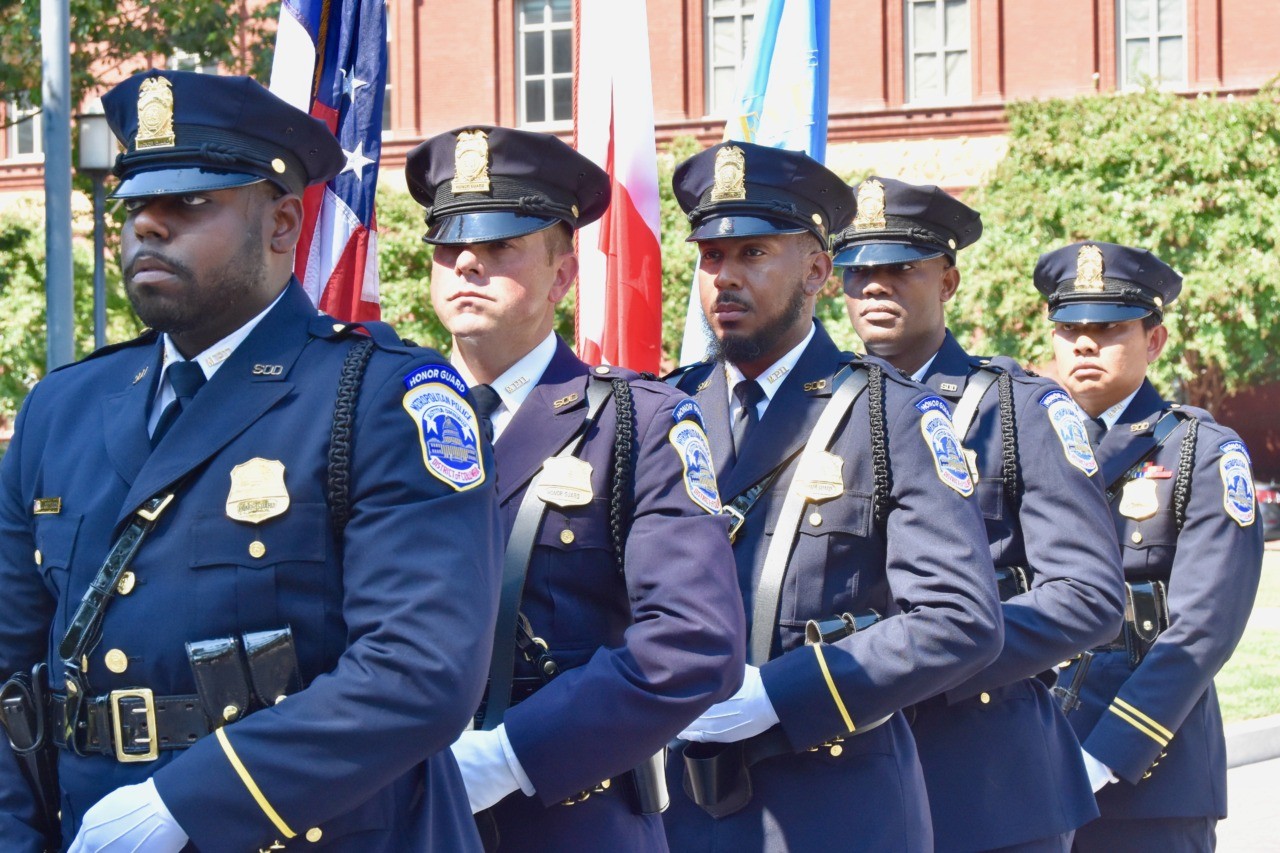 A special agent with the FBI who recounted working the “massive crime scene” at the Pentagon on 911, announced he was retiring on Wednesday so that his badge would bear the date of a day that changed his life.

Roses were laid along the portion of the memorial’s wall that contains the names of the 72 officers who died, and some had placed bouquets near the names of loved ones. 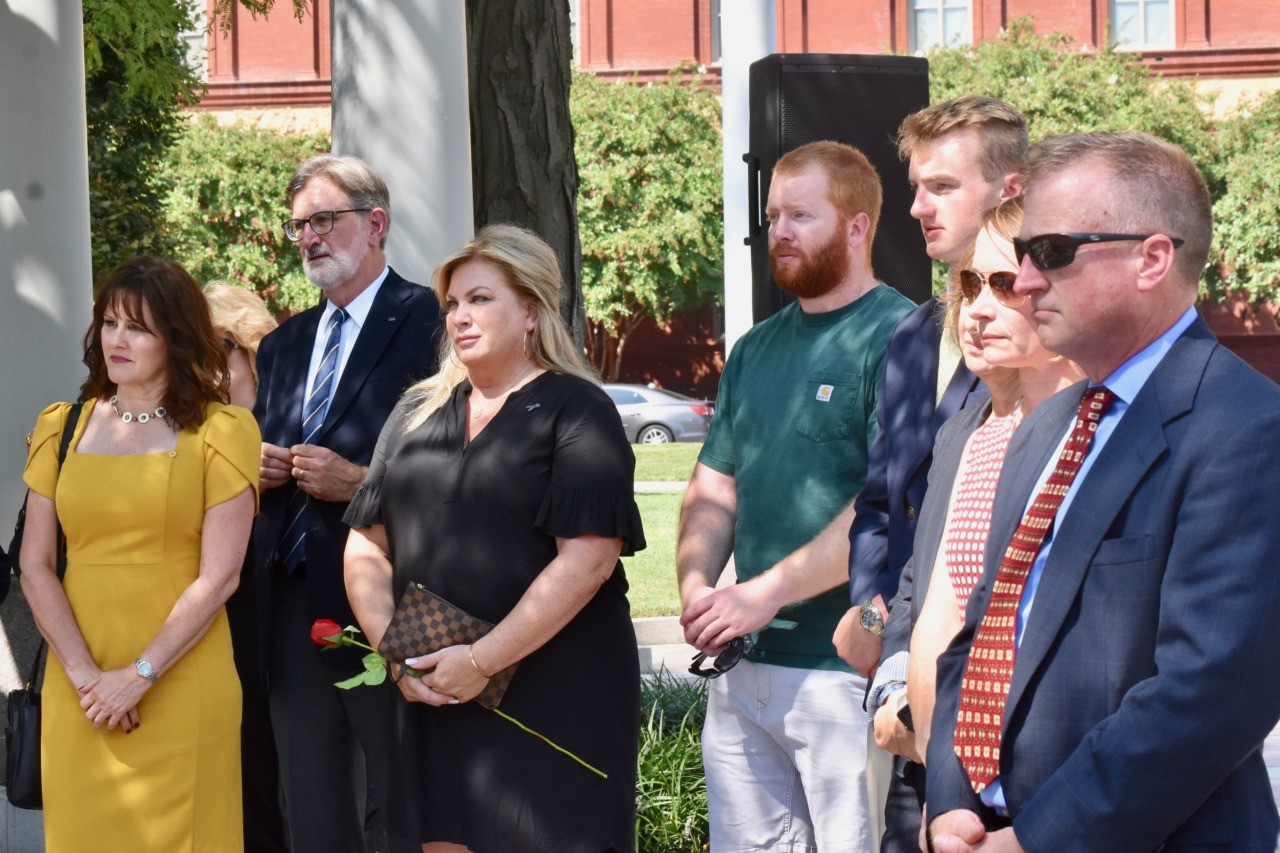 Families who lost loved ones on 911 joined the remembrance ceremony at the National Law Enforcement Officers Memorial on the 19th anniversary of 911. (Penny Starr/Breitbart News)

The National Law Enforcement Museum is located across the street from the memorial and includes in its collection videos from 911 and artifacts from that day, including pieces of a plane and the World Trade Center. 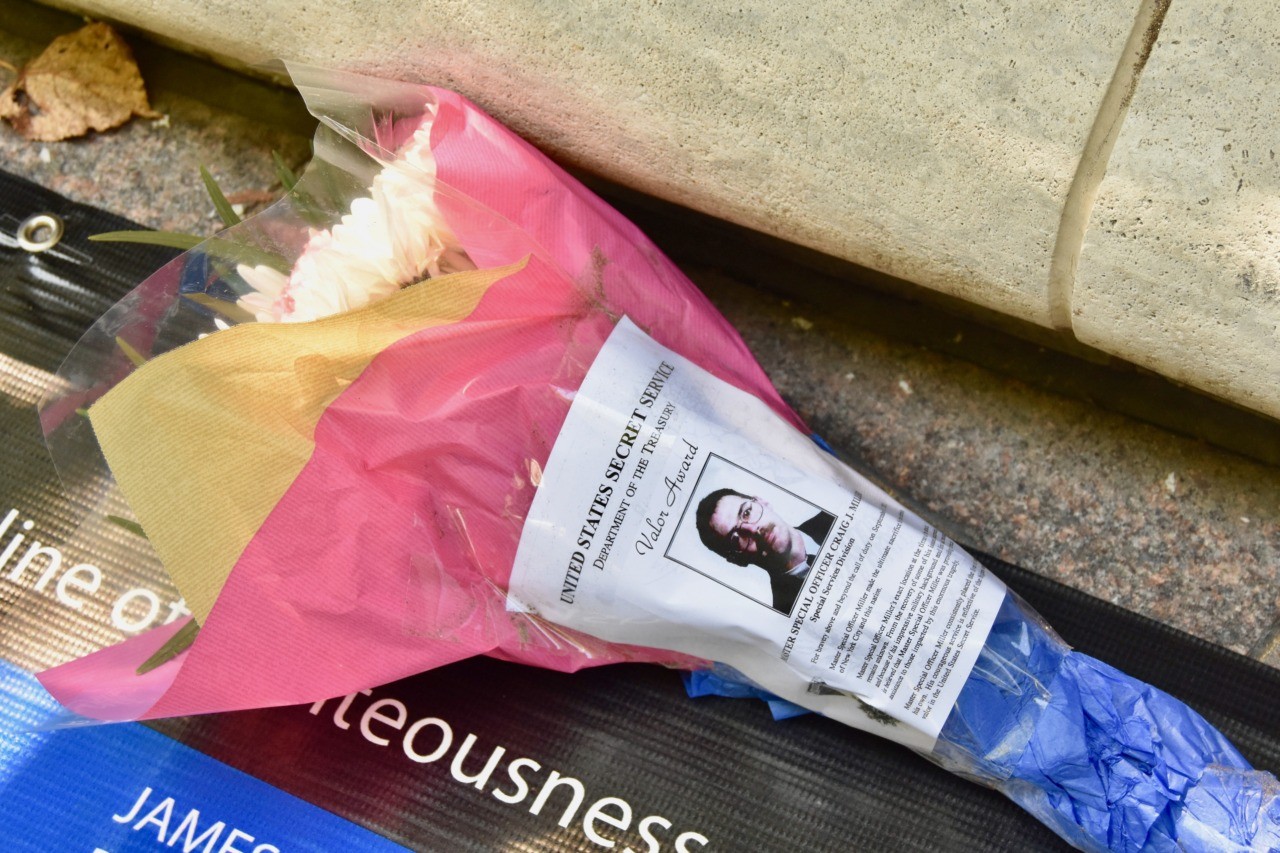