Northrup Grumman is among the companies tapped to make the U.S. Army’s drone killing lasers 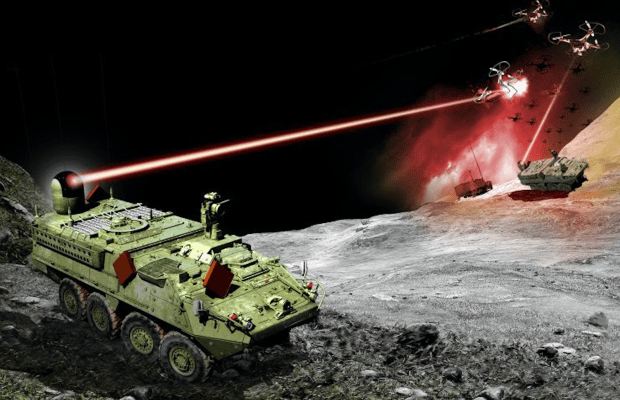 Northrop Grumman is going to be working on the U.S. Army’s long-planned drone-killing lasers.

Basically, the army wants to use these lasers to protect frontline combat troops against drone attacks.

The initiative includes integrating a directed energy weapon system on a Stryker vehicle as a pathfinding effort toward the U.S. Army M-SHORAD objective to provide more comprehensive protection of frontline combat units.

“Northrop Grumman is eager to leverage its portfolio of innovative, proven technologies and integration expertise to accelerate delivery of next-generation protection to our maneuver forces,” said Dan Verwiel, vice president and general manager, missile defense and protective systems, Northrop Grumman, in a statement.

The drone, helicopter, rocket, artillery and mortar defense system that the Army is looking to mount on a group of Stryker all-terrain vehicles could come from either Northrop Grumman or Raytheon, which was also tapped to develop tech for the project.

“The time is now to get directed energy weapons to the battlefield,” said Lt. Gen. L. Neil Thurgood, director of hypersonics, directed energy, space and rapid acquisition, in a statement. “The Army recognizes the need for directed energy lasers as part of the Army’s modernization plan. This is no longer a research effort or a demonstration effort. It is a strategic combat capability, and we are on the right path to get it in soldiers’ hands.”

For the Army, lasers extend the promise of reducing supply chain hurdles that are associated with conventional kinetic weapons. In May, the Army gave the green light to a strategy for accelerated prototyping and field use of a wide array of lasers for infantry, vehicles and air support.

While Raytheon and Northrop Grumman have both been tapped by the Army, the military will also entertain pitches from other vendors that want to carry out their own research, according to the Army.

It’s a potential $490 million contract for whoever wins the demonstration, and the Army expects to have the vehicles equipped in fiscal year 2022.

“Both the Army and commercial industry have made substantial improvements in the efficiency of high energy lasers — to the point where we can get militarily significant laser power onto a tactically relevant platform,” said Dr. Craig Robin, RCCTO Senior Research Scientist for Directed Energy Applications, in a statement. “Now, we are in position to quickly prototype, compete for the best solution, and deliver to a combat unit.”