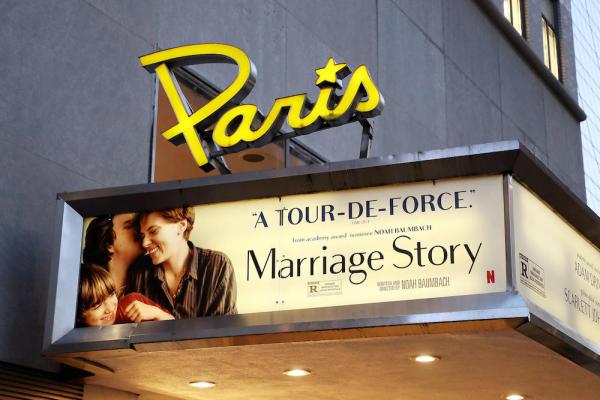 Netflix is expanding its theatrical presence by signing a long-term lease for The Paris Theatre, a historic single-screen venue in New York City.

This follows reports that Netflix is also working to buy the Egyptian Theatre in Los Angeles. And while these might seem like odd moves for a streaming company, they may also be necessary if Netflix wants to continue working with high-profile filmmakers like Martin Scorsese and Noah Baumbach.

After all, although Scorsese’s latest film “The Irishman” and Baumbach’s “Marriage Story” are both playing in theaters, they’re appearing on a limited number of screens.

In the case of “The Irishman,” Netflix reportedly hoped for a bigger rollout but failed to get the major theatrical chains on-board because the company would only wait four weeks (shorter than the traditional window of theatrical exclusivity) before launching the movie online.

Despite its deep pockets, Netflix’s theatrical challenges could dissuade other Scorsese-caliber filmmakers from signing with the service, particularly if the issue hurts the chances that “The Irishman” and “Marriage Story” (and last year’s “Roma,” which won three Oscars but lost out for Best Picture) will be able to win major awards.

So by buying or leasing theaters of its own, Netflix can ensure that its films will get the cachet of a big-screen release. It can also host glitzy premieres and other events.

As for the Paris Theatre, it opened in 1948, and reopened earlier this month to screen “Marriage Story.” (By the way: I highly recommend seeing “Marriage Story” on the big screen — I’ve already done so twice.)

“After 71 years, the Paris Theatre has an enduring legacy, and remains the destination for a one-of-a kind movie-going experience,” said Chief Content Officer Ted Sarandos in a statement. “We are incredibly proud to preserve this historic New York institution so it can continue to be a cinematic home for film lovers.”