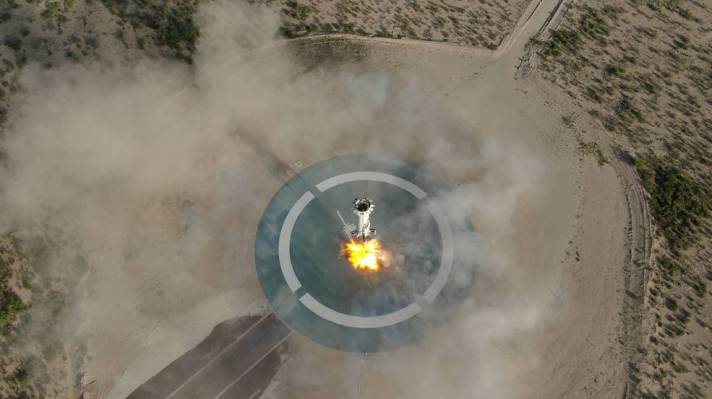 NASA is going to be testing out a new precision landing system designed for use on the tough terrain of the Moon and Mars for the first time during an upcoming mission of Blue Origin’s New Shepard reusable suborbital rocket. The ‘Safe and Precise Landing – Integrated Capabilities Evolution’ (SPLICE) system is made up of a number of lasers, an optical camera, and a computer to take all the data collected by the sensors and process it using advanced algorithms, and it works by spotting potential hazards, and adjusting landing parameters on the fly to ensure a safe touchdown.

SPLICE will get a real-world test of three of its four primary subsystems during a New Shepard mission to be flown relatively soon. The Jeff Bezos -founded company typically returns its first-stage booster to Earth after making its trip to the very edge of space, but on this test of SPLICE, NASA’s automated landing technology will be operating on board the vehicle the same way they would when approaching the surface of the Moon or Mars . The elements tested will include ‘terrain relative navigation,’ Doppler radar, and SPLICE’s descent and landing computer, while a fourth major system – lidar-based hazard detection – will be tested on future planned flights.

Currently, NASA already uses automated landing for its robotic exploration craft on the surface of other planets, including the Perseverance rover headed to Mars. But a lot of work goes into selecting a landing zone with a large area of unobstructed ground that’s free of any potential hazards in order to ensure a safe touchdown. Existing systems can make some adjustments, but they’re relatively limited in that regard.

SPLICE is designed to enable more exact landings, and ones that can deal with more nearby hazards, enabling exploration in areas that were previously considered off-limits for landers. That could greatly expand our ability to gain more knowledge and better understanding of the Moon and Mars, which is particularly important as we continue to work towards more human exploration and even potential colonization.

The lidar system mentioned above is a key new ingredient in these SPLICE tests, since we don’t actually know in great detail how well lidar will perform with the terrain on Mars and the Moon, where reflectivity could be quite different from what it is here on Earth within our own atmosphere. Still, NASA is confident it should provide much better precision than radar-based methods for surface mapping and feature detection.