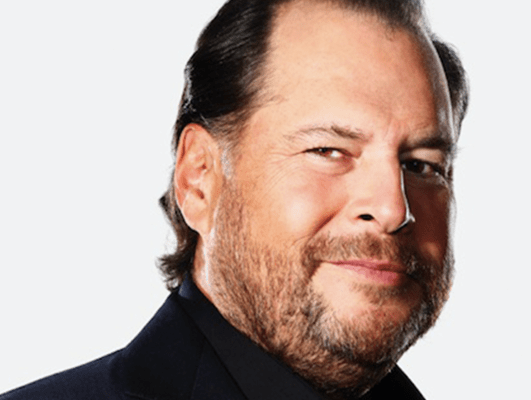 Salesforce chairman, co-founder and CEO Marc Benioff took a lot of big chances when he launched the company 20 years ago. For starters, his was one of the earliest enterprise SaaS companies, but he wasn’t just developing a company on top of a new platform, he was building one from scratch with social responsibility built-in.

Fast-forward 20 years and that company is wildly successful. In its most recent earnings report, it announced a $4 billion quarter, putting it on a $16 billion run rate, and making it by far the most successful SaaS company ever.

But at the heart of the company’s DNA is a charitable streak, and it’s not something they bolted on after getting successful. Even before the company had a working product, in the earliest planning documents, Salesforce wanted to be a different kind of company. Early on, it designed the 1-1-1 philanthropic model that set aside 1% of Salesforce’s equity, and 1% of its product and 1% of its employees’ time to the community. As the company has grown, that model has serious financial teeth now, and other startups over the years have also adopted the same approach using Salesforce as a model.

In our coverage of Dreamforce, the company’s enormous annual customer conference, in 2016, Benioff outlined his personal philosophy around giving back:

This year Benioff is coming to TechCrunch Disrupt in San Francisco to discuss with TechCrunch editors how to build a highly successful business, while giving back to the community and the society your business is part of. In fact, he has a book coming out in mid-October called Trailblazer: The Power of Business as the Greatest Platform for Change, in which he writes about how businesses can be a positive social force.

Benioff has received numerous awards over the years for his entrepreneurial and charitable spirit, including Innovator of the Decade from Forbes, one of the World’s 25 Greatest Leaders from Fortune, one of the 10 Best-Performing CEOs from Harvard Business Review, GLAAD, the Billie Jean King Leadership Initiative for his work on equality and the Variety Magazine EmPOWerment Award.

It’s worth noting that in 2018, a group of 618 Salesforce employees presented Benioff with a petition protesting the company’s contract with the Customs and Border Patrol (CBP). Benioff in public comments stated that the tools were being used in recruitment and management, and not helping to separate families at the border. While Salesforce did not cancel the contract, at the time, co-CEO Keith Block stated that the company would donate $1 million to organizations helping separated families, as well as match any internal employee contributions through its charitable arm, Salesforce.org.

Disrupt SF runs October 2 to October 4 at the Moscone Center in the heart of San Francisco. Tickets are available here.

Did you know Extra Crunch annual members get 20% off all TechCrunch event tickets? Head over here to get your annual pass, and then email extracrunch@techcrunch.com to get your 20% discount. Please note that it can take up to 24 hours to issue the discount code.