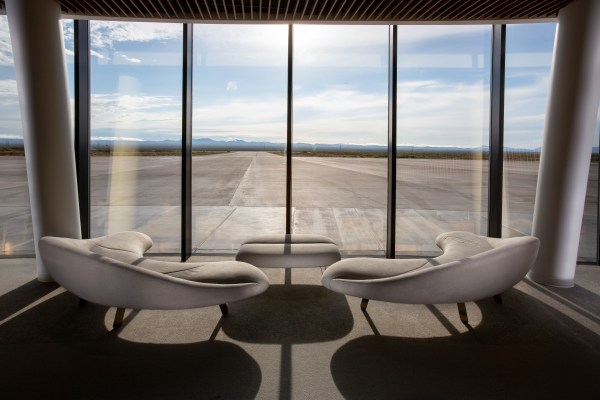 For a couple years now Virgin Galactic’s Spaceport America was more aspirational than functional, but now it’s been built out with the necessaries for commercial spaceflight — mainly coffee. The company just showed off the newly redesigned space from which it plans to launch flights… sometime.

Much of the undulating, aesthetically rusted building, located deep in the desert of New Mexico, is dedicated to housing the carrier craft and rocket planes that the company has been testing for the last few years.

That was almost certainly the hard part, in fact: Relocating the infrastructure necessary to support the spacefaring vehicles, including engineers, equipment, and supply chain people, as Virgin Galactic CEO George Whitesides told me in May.

But the spaceport itself must also become a place for humans to arrive, park at, nervously sip coffee and have a pre-flight meal — if that’s really a good idea for your first trip to space. Maybe stick to coffee.

The “first phase” of the consumer-side build-out includes an elegantly appointed little restaurant and cafe, and upstairs can be found “mission control,” which looks more like a conference room than a spaceplane pilot staging area.

There are a number of little lounge areas for passengers and others to congregate in, and if the scale seems a little small, keep in mind that this isn’t an airport food court. These flights are going to be full, but they’re also going to be six passengers at a time

Jeremy Brown, design director for Spaceport America, explains that the choice of materials and terraced surfaces, leading up to the lighter, airier second story is meant to evoke the landscape outside, which nearly all the seating faces, and draw the attention outwards and upwards.

Although Virgin Galactic has had several successful test flights, there’s no indication when its first actual commercial flight will be.

“The last flight we did, we basically demonstrated a full commercial profile, including the interior of the vehicle,” Whitesides said in May. “Not only did we, you know, go up to space and come down, but because Beth was in the back — Beth Moses, our flight instructor — she was sort of our mock passenger. She got up a couple times and moved around, she was able to verify our cabin conditions.”

The paperwork is in order and the spaceport itself is now equipped with a cafe, so I wouldn’t be surprised if we saw the first flight from Virgin Galactic before the end of the year.