Is Genshin Impact Too Close to Breath of the Wild?

Genshin Impact is insanely popular right now. The free-to-play game started doing the rounds back in 2019 when it was first revealed.

The first thing most people notice about the game is just how much like Nintendo Breath of the Wild it is.

Most outlets have referred to Genshin Impact as inspired by Breath of the Wild.

How close does the game have to be before it’s just a rip-off?

Genshin Impact Is a Decent Game

By all accounts, Genshin Impact is excellent. The company behind the game, miHoYo, proved itself with Honkai Impact 3rd on mobile platforms.

Bringing a free-to-play title to both hardcore gaming and mobile platforms is a pretty impressive feat. The game does indeed have some gatchapon-style monetization aspects, but a free full 3D adventure game is still a good deal.

But, Is It Just a Zelda Clone?

So Genshin Impact is a good game, that’s great news, but is it a Zelda clone? I’d say that it is hands down a complete clone of Breath of the Wild.

That’s not necessarily a bad thing from a moral standpoint. The audience for Genshin Impact is almost entirely different from that of Breath of the Wild. It also allows people who don’t own a Nintendo Switch to try out an incredibly similar experience.

As good as I feel about it, Nintendo almost certainly feels different. I find it shocking that there hasn’t been an attempt at legal action from the normally trigger-happy Nintendo.

You can check out some Genshin Impact gameplay in the video below. 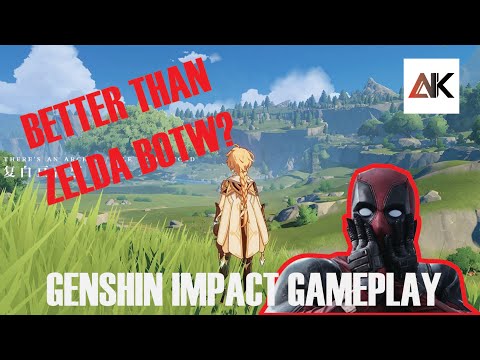 If Genshin Impact Is a Clone, Does It Matter?

Despite being accused of being a clone, Genshin Impact seems to be doing well. Even some backlash from annoyed Nintendo fans doesn’t seem to be slowing it down.

So it doesn’t matter if it’s a clone of Breath of the Wild. People who aren’t able or willing to play Nintendo games are happy to get this title. As long as Nintendo avoids litigation, everyone should be satisfied.

Even if Nintendo decides to go after the developers, being located in China probably protects them from the brunt of Nintendo’s fury. Trying to sue between countries is a messy affair. At this stage, I don’t think Nintendo is even going to bother.