Investors like Sundar Pichai; they just pushed Alphabet into the trillion dollar club for the first time 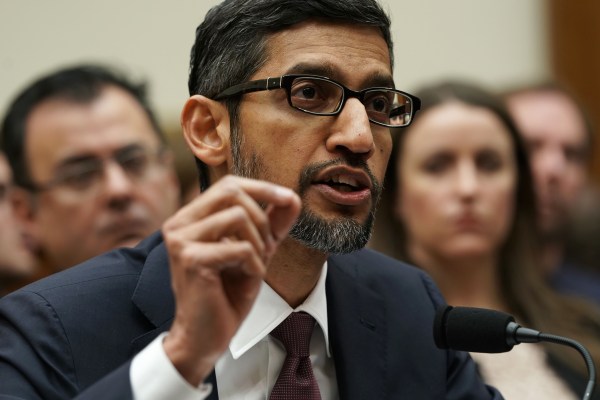 Alphabet this afternoon became the fourth tech giant to join the highly exclusive trillion-dollar club, one whose original member, Apple, saw its market cap soar past $1 trillion for the first time in August 2018 and which has since welcomed — and pushed back out — Amazon, which passed the $1 trillion mark in September 2018 but is now valued at $931 billion; and Microsoft, a charter member since August 2019 and now worth $1.27 trillion.

That Alphabet would be the next tech giant to crack into the ranks is hardly surprising. The now 22-year-old company has grown like gangbusters since its second year in business and has exploded in value since going public in 2004. Still, it’s impossible not to draw a line between today’s development and the news in early December that the company’s founders, Larry Page and Sergey Brin, were handing over day-to-day control to Sundar Pichai, the CEO of Alphabet’s Google since 2015. (That’s when Alphabet itself was incorporated as a holding company.)

For one thing, investors seem to like that much of Pichai’s compensation is tied to the company’s performance. According to an SEC filing from last month, Pichai — now the CEO of both Google and Alphabet — will receive $2 million in salary per year, but he’s poised to earn much more — at least $150 million — if the company hits certain performance targets this year, next year and in 2022.

Analysts have also said they’re hopeful the leadership transition will see Alphabet become more transparent when it comes to reporting its financials to investors. Indeed, despite the company’s many holdings — from YouTube to Waymo, its self-driving car business — Alphabet has been famously vague when it comes to explaining how its various bets are panning out.

Not last, there’s a widespread expectation that Alphabet will become more amenable to larger share buybacks, or that it might institute a dividend payment for the first time because so much of Pichai’s bonus is tied to share performance.

Naturally there are broader trends that have led to this moment.

Alphabet has long been the biggest beneficiary of the ongoing shift online of global advertising and marketing spending, and it has only tightened its grip on the market over time. Just Tuesday, its Google unit announced plans to phase out support for third-party cookies in Chrome within the next two years, which could be the death knell for the rest of the long-suffering online ad industry.

Meanwhile, despite questions about some of its subsidiaries, including Waymo, whose progress has been slower than expected, its 2006 acquisition of YouTube has proven one of the smartest and most lucrative deals in internet history.