The Federal Reserve cut interest rates by a quarter-percentage point, the second cut this year.

The Fed moved its benchmark short-term rate target to a range between 1.75 percent and 2 percent at the conclusion of its two-day monetary policy meeting Wednesday.

“We took this step to help keep the economy strong in the face of some notable developments and to provide insurance against ongoing risks,” Fed chair Jerome Powell said in a press conference after the meeting.

The policy statement released after Wednesday’s meeting indicated the Fed could cut rates again in the months ahead if economic conditions continue to warrant a looser monetary policy.

The Fed’s statement noted that “the labor market remains strong and that economic activity has been rising at a moderate rate. Job gains have been solid, on average, in recent months, and the unemployment rate has remained low. Although household spending has been rising at a strong pace, business fixed investment and exports have weakened.”

Markets have been reflecting the expectations for a second rate cut this month ever since the Fed cut rates at its previous meeting in late July. Futures indicate that traders expect the Fed to cut another quarter of a percentage point before the end of the year.

Three members of the ten-member Federal Open Market Committee voted against Wednesday’s decision. Two would not have cut rates. The third would have cut by a half a percentage point.

Fed officials in August successfully dampened any expectations that they could cut by a half a percentage point at the September meeting.

“Business investment and exports have weakened amid falling manufacturing output,” Powell said at the press conference. “The main reasons appear to be slower growth abroad and trade policy developments.”

Powell singled out weakened growth in Europe and China in particular. He also noted that trade policy tensions have “waxed and waned” this year, heightening uncertainty for businesses and investors. Geopolitical risks, including uncertainty around Brexit, may also be a drag, according to Powell.

The U.S. economy has sent mixed signals recently. Household spending and the labor market have continued to indicate strength while growth in the manufacturing sector and business investment has slowed. The manufacturing sector makes up about 12 percent of the U.S. economy and it is particularly vulnerable to weakening growth around the world and a stronger U.S. dollar that saps demand for exports. It is also politically important because reviving U.S. manufacturing is a key platform of Donald Trump’s re-election campaign.

Fed officials have long expected the U.S. economy to slow this year but say they intend to extend the economic expansion, now the longest on record. Over the long-term, the Fed thinks the U.S. economy should grow around 1.8 percent a year, far lower than the 3 to 4 percent the Trump administration is aiming for.  But in recent months they have become concerned that the economy could cool by more than anticipated, and many economists think a recession in the next two years is now more likely.

Those fears, and the financial market turmoil that accompanied them, led the Fed in January to abandon its policy of gradual rate hikes and to cut rates in July.

Perhaps surprisingly, Fed officials upgraded their view of economic growth this year. At the June meeting, the median projected real gross domestic product growth of Fed officials was 2.1 percent. At this meeting–there were no projections released at the July meeting–the median projection moved up to 2.2 percent. Growth for next year was unchanged at 2.0 percent, while 2021’s growth moved up a tenth of a percentage point to 1.9 percent.

Fed officials continue to project that inflation will not hit its two-percent target until 2021. 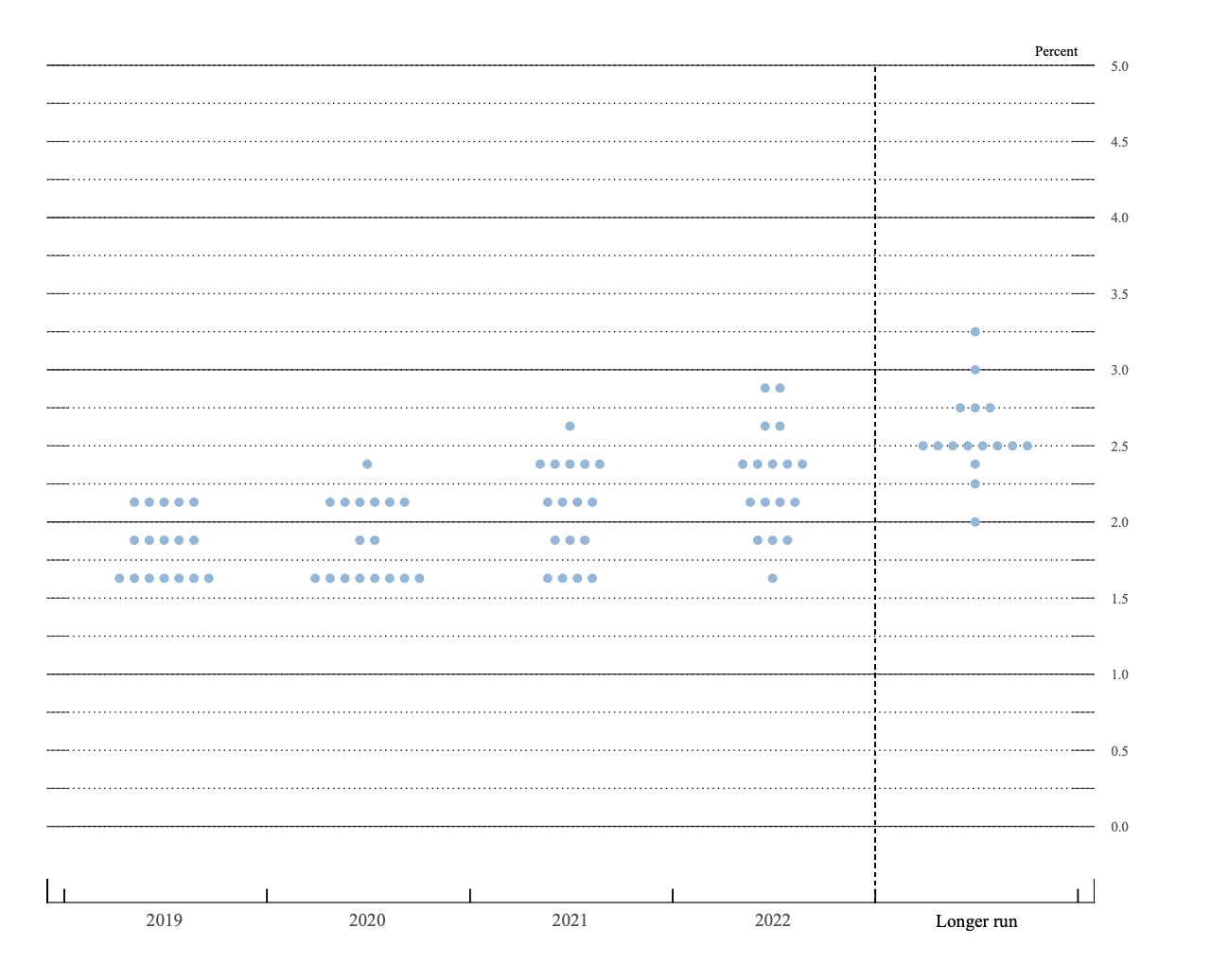 The market reacted poorly to the July rate cut after Powell described it as a “mid-cycle adjustment” and said that it was not the beginning of a longer rate cutting cycle. Stock prices and bond yields fell as investors worried that Fed policy might be too tight in an economy facing headwinds from trade tensions and slow growth in Europe and Asia.

President Donald Trump, a frequent critic of the Fed and Powell, has been particularly vocal in recent weeks. As other central banks around the world cut rates, President Trump has said that the Fed is allowing the U.S. to be taken advantage of. Lower rates in other countries tends to strengthen demand for U.S. Treasuries, driving up the value of the U.S. dollar and making U.S. made products relatively more expensive.

The decision to cut rates a second time also comes at amid turmoil in short-term funding markets that is unprecedented apart from the financial crisis. A scramble for dollars in the repo market, where financial firms swap interest-bearing securities for cash, pushed interest rates up to as high as five percent on Monday, far above the Fed target range where such trade typically settle. In an effort to regain control of the repo market, the New York Fed conducted short-term operations swapping tens of billions of dollars for securities on Tuesday and Wednesday morning. That brought the repo rate back down to the Fed’s target range but left many traders unsettled, in part because there is no ready explanation for the market’s behavior.