Chat bots were central to Facebook Messenger’s strategy three years ago. Now they’re being hidden from view in the app along with games and businesses. Facebook Messenger is now removing the Discover tab as it focuses on speed and simplicity instead of broad utility like China’s WeChat.

The changes are part of a larger Messenger redesign that reorients the People tab around Stories as Facebook continues to try to dominate the ephemeral social media format it copied from Snapchat. The People tab now defaults to a full-screen sub-tab of friends’ Stories, and requires a tap over to the Active sub tab to see which friends are online now. 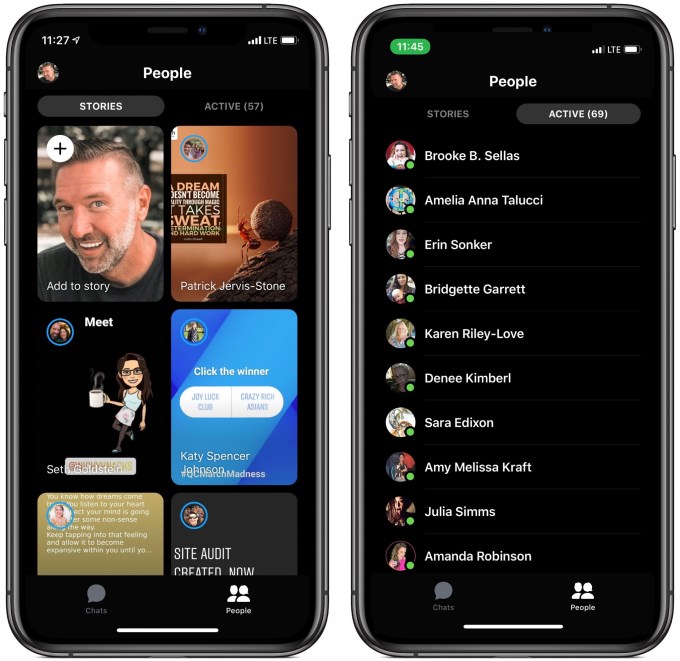 The changes could push users to spend more time visually communicating with friends and consuming content than exploring chat bots for shopping, connecting with businesses and playing games. That in turn could help Facebook earn more money from Messenger as it’s now showing Stories ads.

TechCrunch was tipped off to the redesign by social media director Jeff Higgins, who provided us with extensive screenshots of the update. These show the absence of Discover tab, the switch to just Chat and People tabs and the People sub-tabs for Stories and Active. We poked around some more and noticed the Instant Games and Transportation options missing from the chat composer’s utility tray. That formerly offered quick Uber and Lyft hailing. Messenger’s M Suggestions also no longer recommend the Transportation feature.

When we asked Messenger about the changes, a spokesperson confirmed that this redesign will soon start rolling out, removing Discover and splitting the People tab. Some users already have the update, and more will likely get it this week. They noted that Facebook had announced last August that it planned to eventually axe Discover, and that the added emphasis on Stories was motivated by users’ affinity for the ephemeral social media format. They also told us that Transportation was removed in late 2017, and Instant Games’ removal from the composer is part of the migration to Facebook Gaming announced last July. 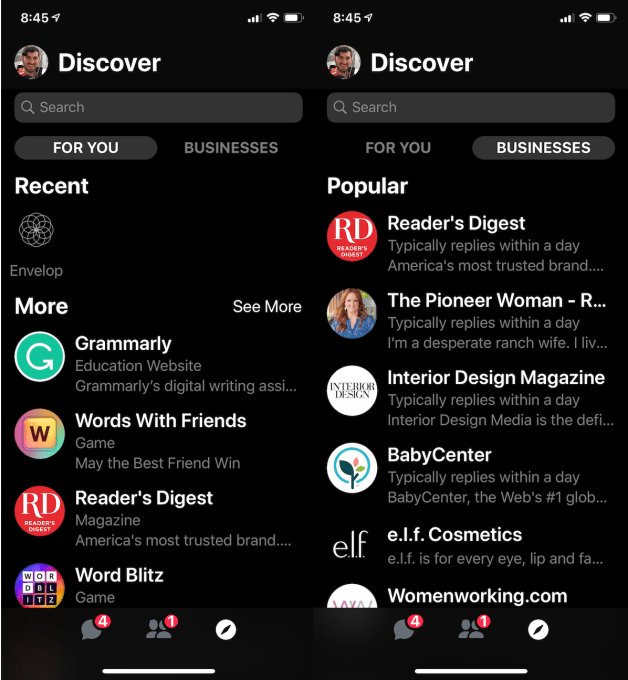 Chat bots, businesses and games are being hidden, but not completely banished from Messenger. They’ll still be accessible if users purposefully seek them through the Messenger search bar, Pages and ads on Facebook, buttons to start conversations on businesses’ websites, and m.me URL that create QR codes which open to business accounts in Messenger. The spokesperson diplomatically claimed that businesses are still an important part of Messenger.

But without promotion via Discover, businesses will have to rely on their owned or paid marketing channels to gain traction for their chat bots. That could discourage them from building on the Messenger platform.

The update feels like the end of a four-year era for Facebook. Back in 2016, it saw artificially intelligent chat bots as a way for businesses to scalably communicate with people, deliver customer service and push e-commerce. But when it launched the chat bot platform at its F8 conference that year, it arrived half-baked. 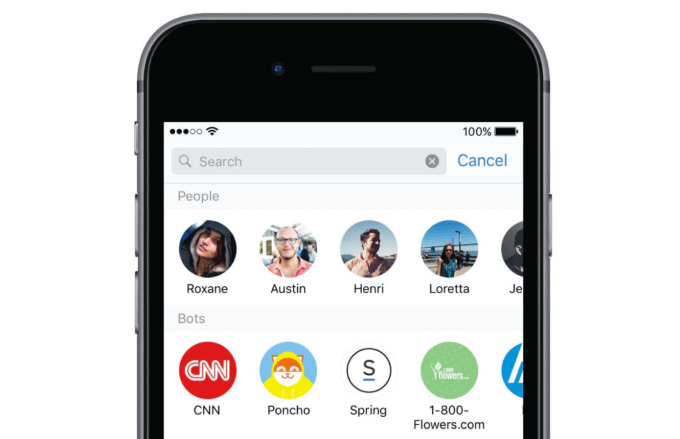 The typing-based semantic user interfaces were confusing, the AI necessary to make chat bots seem human (or at least reliably understand their human conversation partners hadn’t evolved yet) and several of the launch partner bots like Poncho The Weather Cat were laughably useless. The public soured on the idea of chat bots, and attempts to improve them felt insufficient.

Messenger launched Discover in 2017 in hopes that free promotion and visibility might convince developers to invest in building better chatbots. Yet by early 2018, even Facebook was backpedaling, shelving its plan to build out a full-service AI personal assistant called M that you could ask to do anything. Instead, it’d merely make AI suggestions of different Messenger features to use, like Stickers or reminders based on what you typed. Then it announced last year that it would move Instant Games out of Messenger and into Facebook’s dedicated Gaming tab.

There is still an opportunity to use chat bots for gathering initial info from people with sales or customer service inquiries. Everyone hates dealing with this stuff over the phone, waiting on hold and wading through touch-tone menus. Using asynchronous messaging makes communicating with businesses much more convenient. I’d bet Facebook will still be pushing this as an enterprise use case for Messenger. But this still usually requires a human in the loop at some point, and these are better structured as reactive utilities users search for than as experience proactively promoted by a Discover tab. 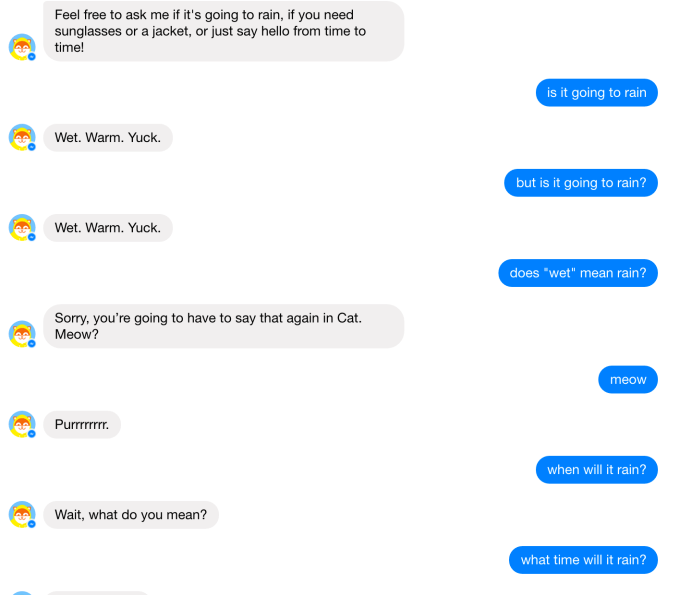 Now with Discover disappearing, Messenger seems to be surrendering the fight to become a WeChat-style monolithic utility. In China, WeCat serves not just as a messaging app but as a way to make payments, hail a taxi, book flights, top up your mobile data, get a loan, find housing or shop at businesses via mini programs. 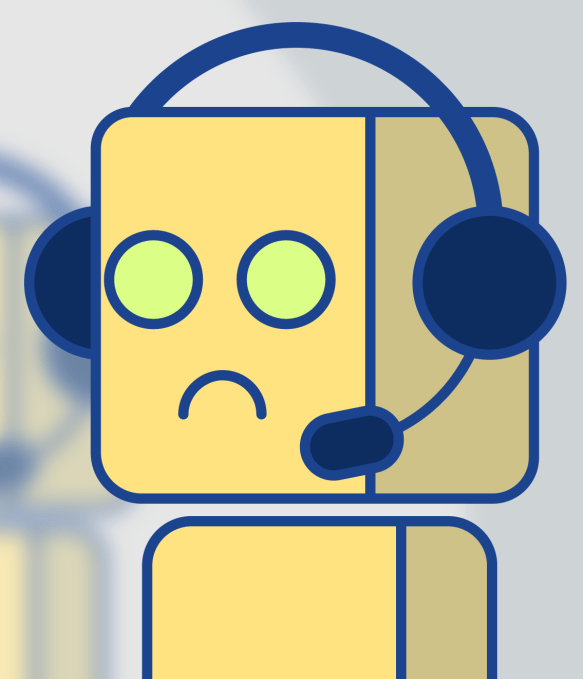 But while that centralized all-in-one style fit Chinese culture, Western markets have experienced more of an unbundling with different apps emerging to handle each of these use cases. Facebook’s constant privacy scandals and increasing anti-trust scrutiny also inhibited this approach with Messenger. Users and the U.S. government weren’t ready to trust Facebook to handle so much of our daily lives. Facebook Messenger also has to jockey with competition like iMessage and Snapchat that could undercut it if it gets too bloated.

So now Messenger is going in the opposite direction. It’s becoming more WhatsApp-like — simple, speedy and centered around peer-to-peer communication. Visual communication through Stories, with replies to them delivered as messages, feels like a natural extension of this focus while conveniently offering a path to monetization. If Messenger can be the best-in-class place to chat, unencumbered by promotion of chat bots and businesses, users might stay locked into the Facebook ecosystem.