The Dow Jones Industrial Average (DJIA) rally fizzled on Tuesday, as an opening bell jump gave way to a painful reversal during the mid-morning session.

Dow Reverses Ahead of Historic Shake-Up

Dow futures pointed to big gains overnight, but the index stumbled into the opening bell and quickly turned lower.

The volatility in the Dow Jones follows news that the blue-chip index is about to undergo a historic shake-up.

They’ll be replaced by new blood from the tech sector – Salesforce and Amgen – as well as one former member: Honeywell.

Watch the video below for more details about the makeover: 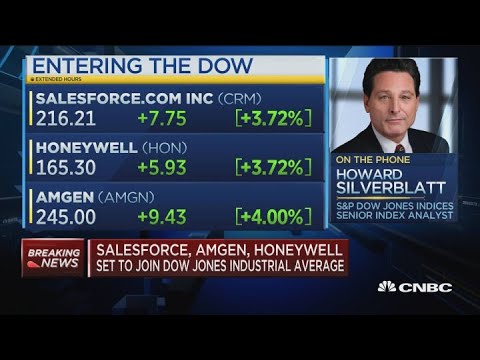 The announcement marks the largest recalibration for the index since 2013, but it’s one that was likely inevitable.

The Dow had already been noticeably underweight on technology stocks relative to the Nasdaq and S&P 500. The Apple stock split threatened to exacerbate the discrepancy – and potentially render the DJIA irrelevant to an economy increasingly ruled by tech.

There’s no question this is a big deal, though there’s a sense in which it’s more symbolic than anything else.

As Jim Cramer noted on Twitter, hardly any funds are indexed to the Dow 30, so the makeover isn’t going to have the fundamental impact that, say, adding Tesla to the S&P 500 would.

According to hedge fund manager Kevin C. Smith, it doesn’t matter what stocks are in the Dow Jones Industrial Average. It’s going to crash anyway.

Smith, the founder of Crescat Capital, alleges that since the financial crisis the stock market has been following a similar trajectory to the one it took in the Roaring Twenties.

While the coronavirus pandemic was the immediate trigger, he believes the March sell-off was the inevitable result of a decade-long bull market built on shaky fundamentals.

And just as the Dow briefly recovered following an initial lurch lower in 1929, Smith – who describes himself as a “tactical bear” rather than a “permabear” – warns there’s an even steeper crash ahead for U.S. stocks in 2020.

“History doesn’t repeat itself, but it often rhymes,” he wrote on Twitter.

Smith identifies three parallels that he claims justify his assertion that the Dow is about to tumble like it did at the onset of the Great Depression:

Crescat has a bit of a mixed track record on this contrarian call. The firm made a fortune in March by betting against the market. It raked in 40.5% and 34.5% across two of its main funds.

Then stocks recovered – making investors who bought the dip look like the market’s true oracles.

Smith and Crescat aren’t deterred. They’re still waiting for the other shoe to drop.