The Dow and broader U.S. stock market tumbled on Friday, setting the stage for another weekly decline for the major indexes as concerns about economic recovery continued to reverberate.

U.S. stocks wobbled after Friday’s open, reflecting a tepid pre-market for Dow futures. The Dow Jones Industrial Average declined by as much as 147 points before paring losses.

The broad S&P 500 Index of large-cap stocks fell 0.3%, with most sectors reporting declines. Losses were concentrated mainly in materials and energy companies.

The Dow eked out narrow gains on Thursday after a rocky session. The blue-chip index traded within a 500-point range before finishing slightly higher.

A measure of market volatility known as the CBOE VIX edged higher on Friday. The so-called “investor fear index” peaked at 30.43 before falling back below 30. VIX trades on a scale of 1-100, with 20 representing the historical average.

Equities opened the month of September at record highs, as optimism surrounding the economic recovery and central-bank stimulus boosted investor sentiment. The rally quickly eroded as mega-cap tech stocks plunged into correction territory in a matter of days.

Watch the video below: 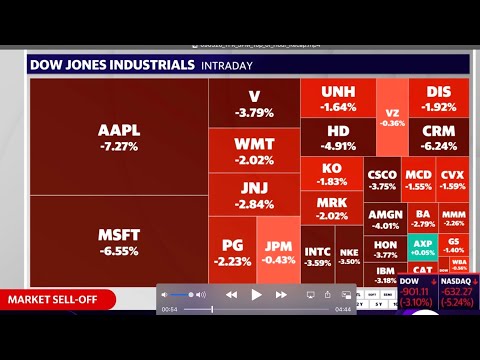 With tech shares rolling over, Wall Street lost much of its momentum. Case in point: Apple shares are down more than 19% from their most recent high on Sept. 1. Tesla has plunged nearly 18% over the same period.

Investors are bracing for more volatility in the weeks ahead as Americans head to the presidential polls in November. Democrats and Republicans reached a deal earlier this week that averts a government shutdown after Sept. 30, but progress on a new stimulus bill has stalled. At this stage, a new coronavirus stimulus package is unlikely to be ironed down before the election.