Demon’s Souls DLC Is Beyond Stupid

Demon’s Souls is one of the hottest items in the PS5 launch line-up.

Since the original game came out in 2009, the series has been launched to new heights of popularity.

Unsurprisingly, many folks are hyper-excited for the remake because the decade-old game needs updating.

The publishers didn’t get the memo about not updating the way the game is sold, as Demon’s Souls has more pointless DLC then any game needs.

Demon’s Souls Has Too Much DLC

Recently, Sony revealed the pre-order bonuses for Demon’s Souls. The bonus in question is an exclusive weapon to use in the game in the form of the Reaper Scythe.

Alone with the scythe, Sony revealed a truckload of DLC to be released with the game’s Digital Deluxe Edition. This edition of the game will include 13 different pieces of DLC.

As if having one DLC exclusive weapon wasn’t bad enough, the new batch includes not only a weapon, shield, and two sets of armor, but consumables as well. You’ll be given the equivalent of in-game experience points for paying more money. This DLC package is the definition of pay-to-win.

You can check out more information about the Digital Deluxe Edition of Demon’s Souls in the video below. 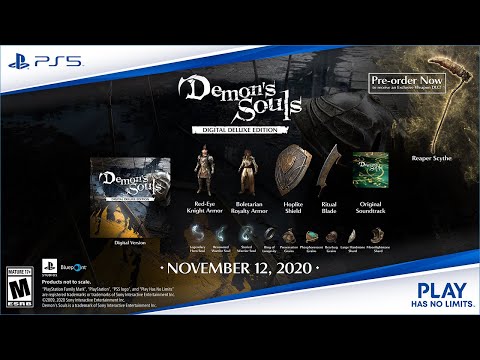 These Items Are the Antithesis of the Souls Series

The worst part about this Demon’s Souls DLC is that they go against everything the entire series is about.

Not only are you buying your way into more power from the start, but you don’t even have to work for the armor and weapons. Workin for these weapons is a huge part of what makes the game so good. Usually, finding interesting weapons in Demon’s Souls means scouring and exploring every hidden area while fending off powerful enemies.

If you can buy decent weapons from the start, then what’s the point of even playing? Sony might as well have just released a piece of DLC that finished the game for you.

Look out for microtransactions when you’re struggling with a boss; after all, they did patent a system for such a reason not too long ago. With that system and the gaming time-keeper, Nintendo might soon not be the only company trying to tell you how to enjoy your games.