Clarence Thomas’ story is uniquely American but not always in a pretty way, from the poverty and racism he faced growing up in the South to the very public and grueling confirmation process that paved the way to his becoming the second black man to sit on the United States Supreme Court.

As a man who rarely seeks the spotlight and whose silence during oral arguments is renowned but misunderstood, a new documentary about Justice Thomas, Created Equal: Clarence Thomas in His Own Words, opens today in theaters nationwide and reveals not only his intellectual prowess but also his humanity rooted in his love for his grandfather.

Myers Anderson was illiterate but built a thriving fuel business in Georgia that allowed him to live a comfortable life — Thomas recalls moving in with his grandfather where he for the first time lived in a house with a bathtub and a flush toilet.

Thomas called his grandfather “the greatest man I have ever known,” and credits him with his work ethic.

And yet, as the descendants of West African slaves who lived in Georgia, South Carolina, and Florida, Thomas faced discrimination and racism that began in his youth and continues to this day.

In the film — written and helmed by award-winning director Michael Pack — which is both straightforward in its face-to-face interview with Thomas and is full of dramatic flashbacks, Thomas recalls his grandfather being pulled over in his truck because he was wearing too many clothes.

To “run into the law” was a fact of life for blacks, especially black men, Thomas said, and he knew instinctively that discrimination had to be fought in all its incarnations, including parks, schools, and other public spaces being off limits.

“So I decided I was going to go to law school,” Thomas said.

“We had heard through mutual friends that Justice Thomas was tired of having his story defined by his enemies and by the half truths and untruths that were spread about him,” Pack said. “So, I met with him.”

“After talking to him and researching his life, I saw that his life story was a classic Horatio Alger story, from his beginnings in dire poverty in the segregated South to the highest court in the land,” Pack said. “And, I saw that he was the ideal person to tell it.”

“In the three years during which we have been working on the film, recent events, such as the Me Too Movement and the Kavanaugh Hearing, have only made it more relevant,” Pack said. “But, it is a great, timeless American story.”

Those who associate Thomas with his judicial philosophy of Constitutional originalism may be surprised to know he was not only a Democrat but, as he puts it, “let myself get swept up by an angry mob” because of racism.

Thomas’ epiphany came when he realized as a college-educated lawyer that blacks committed almost 80 percent of violent crimes and 90 percent of black murder victims were killed by other blacks.

“That was my road to Damascus experience,” said Thomas, referring to the apostle Paul’s conversion to Christianity.

Not only did he vote for Ronald Reagan — “a giant step for a black man” — but he eventually took a job with Republican Senator John Danforth — a man who not only shared Thomas’ worldview but, like Thomas, had at one time considered becoming clergy, albeit in different denominations.

The film explores Thomas’s distinguished career before he was seated on the Supreme Court, including his time as assistant attorney general of Missouri under then-Attorney General Danforth.

In 1981, he joined the Reagan administration, first as Assistant Secretary of Education for the Office for Civil Rights in the U.S. Department of Education, and from 1982 to 1990 he was chairman of the U.S. Equal Employment Opportunity Commission (EEOC).

It was that latter appointment that would become the center of his contentious confirmation hearing after former EEOC employee Anita Hill accused him of sexual harassment. Footage in the film of the hearing is riveting and includes the genius of his now famous “hi-tech lynching” remark about his treatment. 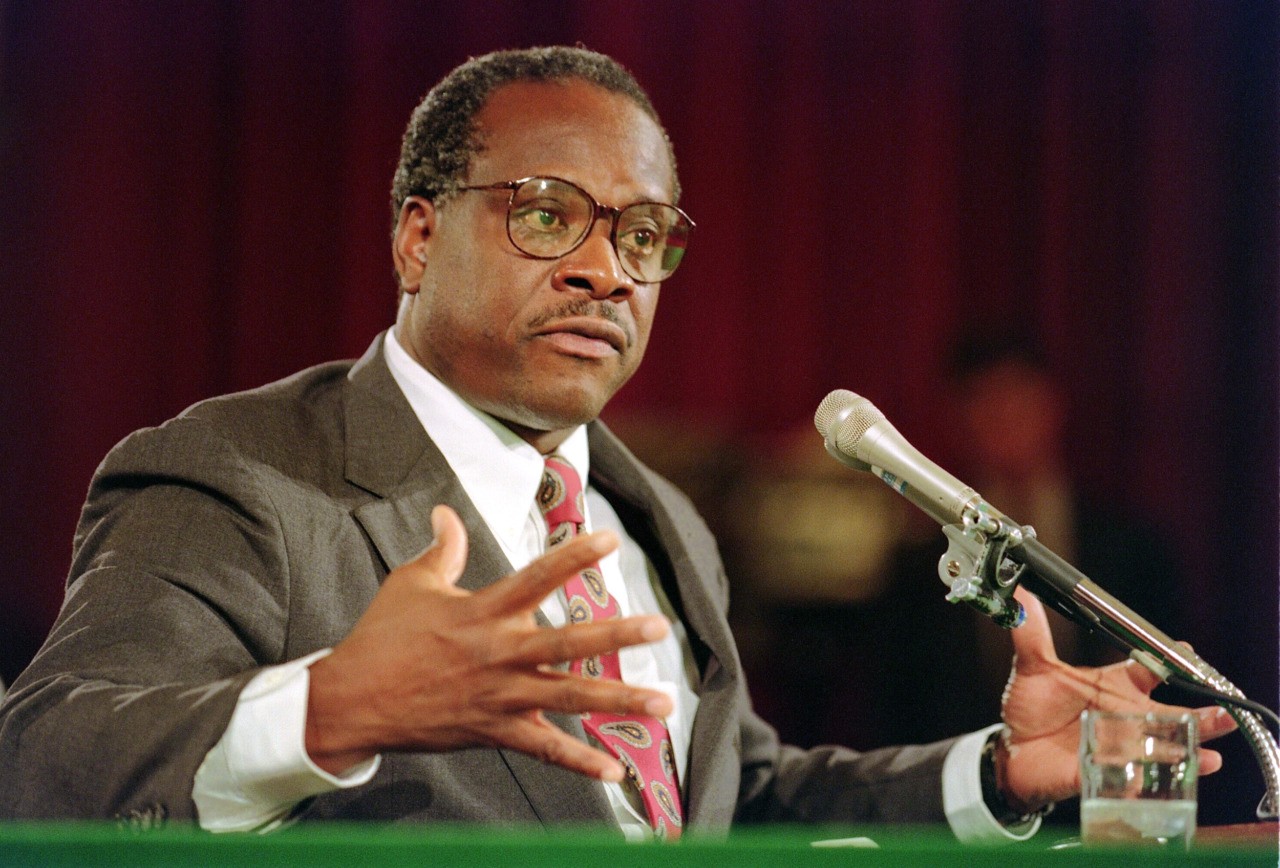 The documentary includes interviews with Thomas’ wife, Virginia Lamp, who he calls a “fabulous gift from God.”

Lamp recalls her horror upon hearing what she said were “so untrue” claims about her husband and the outrage she felt of having him relentlessly grilled by then-Chairman of the Senate Judiciary Committee, Joe Biden, and the late Sen. Ted Kennedy, whose involvement in the death of Mary Jo Kopechne following a car accident where he was in the driver’s seat seemed a glaring irony.

As Thomas put it, including comparing his ongoing battle against racism to that of the black man accused of raping a white women in the iconic To Kill A Mockingbird, it is “still the same old story.”

“You can’t trust a black man around women,” Thomas said.

The film reveals that the discrimination against Thomas as a black conservative has not really wavered, from the “Uncle Tom” references early in his career to a political cartoon showing Thomas toasting with fellow Justice Brett Kavanaugh, who also faced now-debunked charges of sexual misconduct before he was confirmed to the Supreme Court.

As to his reputation as the silent justice on the bench, Thomas said in the film that he believes a justice’s roll is to be “a judge, not an advocate,” and that oral arguments should be about the attorney making his case rather than time spent arguing with them.

He also reveals respect for the Founding Fathers and the founding documents, which he said honor man’s inalienable rights that come from God and limited government.

“You give up only so many [rights] so as is necessary to be governed by your consent,” Thomas said.

The documentary also shares the man inside the robe who prefers “Walmart parking lots” to beaches, and favors vacations around America in his motorhome to a trip abroad.

Thomas credits this to his roots and his deep love for the country and everyday Americans.

As to his legacy, Thomas again turns to his grandfather, who he looks forward to reuniting with in the afterlife where he will tell him, “I lived up to my oath and did my best.”

Or as his wife said in the film: “I think he hopes when he gets to heaven that his grandfather will say, ‘Well done.’”