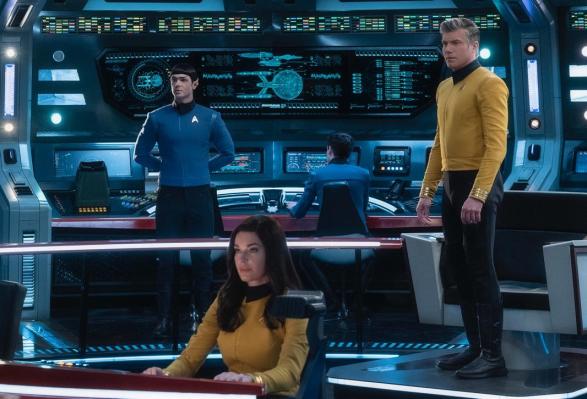 After bringing the franchise back to TV with “Star Trek: Discovery” in 2017, then revisiting some beloved characters with “Star Trek: Picard” earlier this year, the streaming service has placed a straight-to-series order for “Star Trek: Strange New Worlds,” which will depict the early days of the Enterprise, before Captain Kirk took command.

We already got a glimpse of that in the second season of “Discovery,” which saw Captain Christopher Pike (Anson Mount) and a young Spock (Ethan Peck) join the cast — but they left Discovery and returned to the Enterprise at the season’s end, in what felt like an obvious set-up for a spin-off.

“Strange New Worlds” will star Mount and Peck, along with “Discovery” guest star Rebecca Romijn as Number One. The premiere will be written by Akiva Goldsman (also a writer and director on “Discovery” and “Picard”), with a story by Goldsman, Alex Kurtzman and Jenny Lumet.

“This is a dream come true, literally,” Goldsman said in a statement. “I have imagined myself on the bridge of the Enterprise since the early 1970s. I’m honored to be a part of this continuing journey along with Alex, [executive producer] Henry [Alonso Myers] and the fine folks at CBS.”

Until now, CBS All Access has been distinguished primarily for its willingness to greenlight a range of Star Trek spin-offs — it’s also developing an animated series called “Star Trek: Lower Decks”, along with a show focused on Michelle Yeoh’s Philippa Georgiou and the nefarious Section 31.

This summer, the newly re-merged ViacomCBS plans to launch a rebranded version of the streaming service, drawing on content from across ViacomCBS brands like Nickelodeon, MTV, BET, Comedy Central, Smithsonian and Paramount. But it still looks like Star Trek will remain a big part of that mix.

There’s no release date announced for “Strange New Worlds.” After all, it may be a while before any show can resume production.