Imagine having to submit your biometric data at a gas station, which is then cross-referenced with your nation’s socialist system database, to receive a monthly ration of fuel. Such a dystopian concept is now a reality in the Bolivarian Republic of Venezuela.

Having the world’s cheapest gasoline was the nation’s last remaining selling point, even though acquiring a modest vehicle is an impossible dream for most. For as long as anyone can remember, gasoline was virtually free here. Until recently, completely filling up a vehicle’s tank would cost you less than 100.00 Bolivars, or roughly less than $0.0005.

That reality is no more as of this month.

Maduro’s socialist regime has implemented a new system for the control and distribution of gasoline in Venezuela. Refueling a vehicle is no longer as simple as driving to a station and doing the deed. Now, you are only allowed to do so on specific assigned days according to the last number of your vehicle’s license plate. 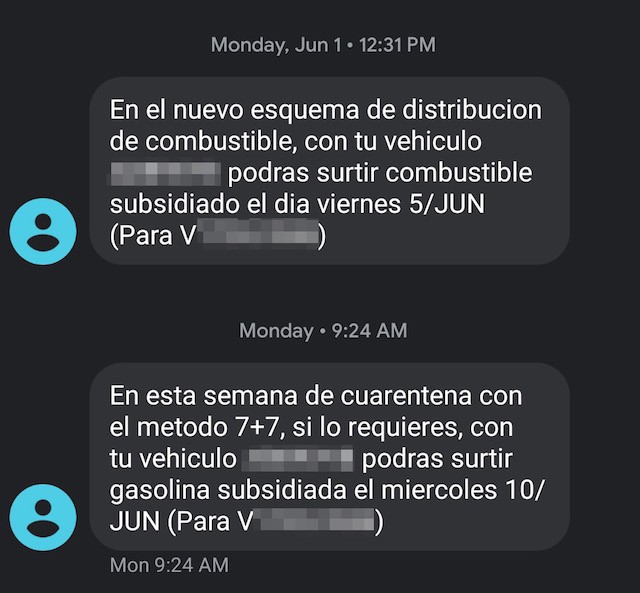 This new system has two modes: The first one, a subsidized one, involves signing up to the regime’s Fatherland System and obtaining your “Fatherland Card.” This system was created with the aid of China and contains all sorts of information, including your vehicle and your biometric data. It is through this system that you will receive a monthly allotment of subsidized gasoline: 120 liters if you have a regular vehicle, or 60 liters if you have a motorbike.

The subsidized price might seem generous. After all, it is only 5,000 Bolivars per liter, which roughly translates to $0.025 per liter. But for those who earn minimum wage (which as of the time of writing this is 800,000 Bolivars per month), 40 liters of fuel represent 25 percent of your income.

If you exceed your monthly quota, or you simply refuse to sign up for the Socialist Fatherland system, then fuel will be sold to you at a rate of $0.50 per liter — twenty times more expensive than the subsidized price.

This tier can be paid with our local currency, the regime’s “Petro” scam cryptocurrency, and even with the once demonized and capitalist U.S. dollar — the one that the regime wishes you to pay them with, and the only form of payment that’s being accepted in some gas stations.

Regardless of the mode you choose, all transactions will eventually pass through the regime’s biopago system, which will now use your biometric data to track your sale and fuel consumption.

The first days of the implementation of this system have seen endless and torturous lines. Take this one, for example – this is one long line of vehicles queuing up with no guarantee that they’ll get fuel on that day, and this is in one fuel station, in one city.

In this other example, vehicles had been queuing up since 05:00 a.m. There are members of my family that live outside of Caracas and they have had to queue up on Sunday night, spending all night in the queue, just to be able to refuel close to noon on Monday.

As for myself, because of a nightmarish bureaucracy conundrum due to the fact that my mother’s vehicle was still under its previous owner’s name at the time of her passing, I haven’t been able to transfer legal ownership of her vehicle. In theory, this creates an incongruence that may very well lock me out of the new system if they double down on it but, luckily, the car had some electric issues that were being checked for right before the lockdowns – the one and only reason that I can at least put the gasoline headache aside for now.

While they can implement all the systems, checks, and controls that they can conjure, the truth is that there simply isn’t enough gasoline left in the country. This socialist regime, in its infinite incompetence, has destroyed Venezuela’s once robust oil industry through years of corruption and mismanagement, leaving it so crippled that it can only put out a fraction of what it used to — not to mention that a permanent oil tithe to the Cuban regime must be paid no matter what.

For the past two and a half months, obtaining gasoline in this socialist nation has become a via crucis of its own. At first, the shortages were obfuscated by the start of the nationwide Chinese coronavirus lockdowns and palliated by a growing black market where fuel can be found at steep prices. The shortages have rapidly turned Venezuela from the country with the world’s cheapest gasoline to the most expensive.

The situation has become so severe that some citizens have begun to modify their vehicles to make them run using cooking gas. As outlandish and dangerous as this sounds, this has become the only alternative for those that need to use their vehicles to provide food for their families.

Aided by one of its partners in crime, Maduro’s regime received a supply of oil from Iran to prevent the crisis from getting any worse. The arrival, of course, was presented as a triumph, as something worth celebrating — to the point that members of the U.S.-sanctioned National Constituent Assembly have made calls to plaster the Iranian flag and Qasem Soleimani, the Iranian terror chief the U.S. military eliminated in January, everywhere. The Iranian flag has since been raised in several places.

It’s worth mentioning that if I were to do the same with the American flag then that’d be the end of me even though I wouldn’t be breaking any laws by doing so.

The circus built around the arrival of Iranian fuel hasn’t distracted us from the truth: that a country cannot function without gasoline, and it goes without saying that people’s lives have been greatly affected by these drastic fuel shortages. Mobility around large cities such as Caracas has been greatly limited, impairing people’s ability to work if they have to move through longer distances to reach their workplaces — not to mention that, if there’s no supermarket or grocery store near your household, then your ability to easily restock on food gets impaired as a result.

It’s alright though, you can always follow our glorious socialist state media’s advice: Don’t go out. If you don’t go out you won’t need gasoline, ergo, you don’t need to wait in line for endless hours — brilliant. Somebody call the guys at the Nobel Prize to hook this guy up with one. I’d do it but it’s been years since I’ve been able to make international phone calls.

For the past two decades, the solution to each and every shortage that has originated as a consequence of this Bolivarian Socialist and their Fatherland Plan has been rationing, quotas, systems, and regulations, all of which have ended in corruption—this new gasoline system will be no exception.

As I mentioned in a previous entry, no one stays sane in this country, and the anger and exhaustion of this inhumane nightmare is building up. From the wrath unleashed upon a fuel station that charged its customers in U.S. dollars, to the despair of a woman that had been queueing since early morning hours.

Meanwhile, Juan Guaido, the “interim” President of Venezuela, not content with forging a collaborationist pact with Maduro, has released some lukewarm and vague statements, with hypothetical promises of gasoline returning to the country within a fortnight if and when Maduro is ousted. These statements are as helpful to this ongoing crisis as me laying on my bed and staring at the ceiling.

Once again, the socialist regime of Venezuela has proven to be capable of doing the impossible. Venezuela, the country with the world’s largest proven oil reserves in the world, has run out of gasoline. Such a monumental feat is yet another miracle that can only happen in Revolution.

Christian K. Caruzo is a Venezuelan writer and documents life under socialism. You can follow him on Twitter here.