The Quotable Joe is described as a “collection of the most racist statements, lies, made-up stories, and dumbfounding moments of Joe Biden’s entire career.”

“I was reporting on the 2020 campaign primaries, and I noticed his quotes during those primaries were out of whack, and they were just so out of whack that I decided, you know, it would be a great idea if there were a collection of those quotes, and I decided to make it into a book,” explained Rodriguez, who has been with Breitbart News since 2016.

Chapter titles from the book include Racial and Sexual Malapropisms, Lies and Flip-Flops, and Made-Up Stories.

“He made a statement about Indian accents in Delaware to a voter,” Rodriguez said, highlighting a Biden gaffe that did not receive much coverage. “He said, ‘You cannot go to a 7-Eleven or a Dunkin’ Donuts unless you have a slight Indian accent. I’m not joking.’” 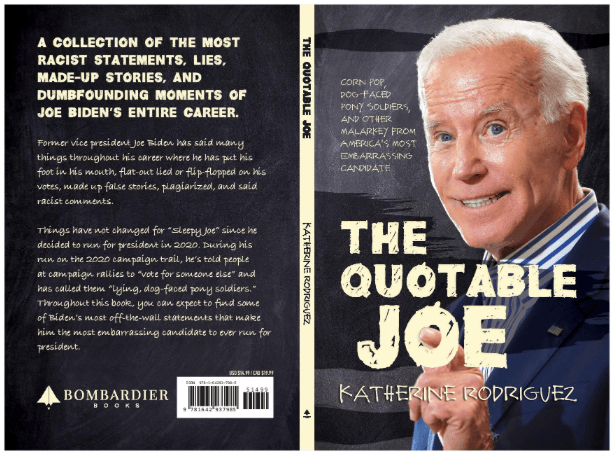 Describing Biden’s flip-flops on an array of issues, Rodriguez said, “I think one of my favorites is when he flip-flopped on the war in Iraq. In the year 2002, he voted with Bush to support the war in Iraq, and then in 2019, in an NPR interview, he said he was actually opposed to the war immediately.”

“Biden was basically stumping on the 2012 campaign trail, and he was discussing Mitt Romney’s plan for Wall Street, telling the audience, that included many African Americans, they’re gonna ‘put y’all back in chains,’” Rodriguez said, noting that he received great pushback from the Romney campaign.

“The Obama campaign just called the controversy faux outrage, but they had to backtrack and release a statement clarifying that Biden’s comments were actually referencing Republican remarks about unchaining the private sector and unshackling the middle class,” Rodriguez added.