Bloomberg: Elite Immigrants Can Save Americans from a High-Tech Economy

Immigrants are needed to rescue Americans who cannot keep pace with the high-tech economy, Mike Bloomberg told an elite audience at Oxford University.

It’s not clear the teachers can teach, or the students can learn … The solution to our problems is more open borders, not closed borders [because] … If you don’t have successful people, you’re never going to have the wherewithal to support, to help, those who are not [succesful].

Bloomberg’s call for more skilled immigration matches his own business activities, and it is a central part of his 2020 campaign for the presidency, just as reduced immigration was a fundamental part of Donald Trump’s 2016 campaign.

President Trump has mostly blocked the illegal migration of blue-collar migrants into the United States, but he has done little to stop the white-collar replacement. But Bloomberg is promising to make the replacement of American employes and graduates into a foundation of his technocratic vision.

Many Americans do not have the brainpower to keep pace in a high-tech economy, said Bloomberg, who has an estimated wealth of $60 billion:

The agrarian society lasted 3000 years, and we could teach processes [to almost everyone].

I could teach anybody — even people in this [elite university] room, so no offense intended — to be a farmer. It’s a process: you dig a hole, you put a seed in, you put dirt on top, add water, up comes the corn. Then you have 300 years of the industrial society: You put the piece of metal on the lathe, turn the crank the direction of the arrow, and you can have a job.

The United States may be destabilized if these less-intelligent people cannot get decent jobs, he said:

And so the challenge for society to find jobs for these people — whom we can take care of, giving them a roof over their head, and a meal in their stomach, and a cell phone, and a car, and that sort of thing.

But the thing that’s the most important, that will stop them from setting up the guillotine someday, is the dignity of a job. Nobody has yet come up with a simple solution in this day and age to how we create jobs, particularly for people already out of school.

But people want jobs with a purpose, Bloomberg noted;

You take the money from the rich, and you give it to the poor. You do it for altruistic reasons. You do it because you don’t want the poor on your doorstep and a variety of things.

But I think what you’ve got to understand is the people who are getting the subsidy want the dignity of a job. They want the dignity of being responsible for their family and being able to take care of it. And that’s the conundrum we’re going to have here because technology is reducing the ability to give them the jobs.

Government policy has to solve the jobs and dignity problem, he said, because business must be left alone to generate value for shareholders:

Businesses’ job is to take their investors’ money and to maximize the money by creating products that the public wants and are willing to pay for. And you can’t say to them, they should go and create jobs deliberately.

You can have a tax policy that encourages that, and that’s one of the things you should do and then use the collective wisdom of all of the heads of companies to create jobs small pockets and it adds up to a lot of jobs.

Corporate immigration is needed to import the cleverest people so companies can generate the income needed for government spending, he argues:

In his 2020 campaign, Bloomberg has repeated his claim that U.S. business needs clever migrants. “This country needs more immigrants, and we should be out looking for immigrants,” Bloomberg told the San Diego Union-Tribune on January 5:

In December, Bloomberg said additional immigrants could “improve our culture, our cuisine, our religion, our dialogue, and certainly improve our economy” — but without being asked by reporters which Americans’ culture, cuisine, religion, and dialogue do not meet his standards.

Bloomberg — and the establishment media — have ignored the vat evidence that large-scale legal migration shifts vast wealth from ordinary Americans to investors, from young to old, and from central states to coastal states.

His campaign posts multiple tweets showing Bloomberg’s calls for more immigration — but wraps his demands for foreign labor within poll-tested claims about a “broken immigration system,” and the Cold War-era claim that Americans’ homeland is really a “Nation of Immigrants”:

The America I know welcomes the world. Trump’s America is not that America.

But, we can turn the page on this shameful chapter in our country’s history.

Together, we can fix our broken immigration system once and for all. pic.twitter.com/jNiTSZsKSw

I believe we can once again be a country that welcomes immigrants, values immigrants, respects immigrants, and empowers them to pursue the American Dream. https://t.co/q14X4YlFGP pic.twitter.com/mX08mXxpAh

Without immigrants, Americans wouldn’t have hamburgers or blue jeans — and Trump wouldn’t have his current, very temporary, residence. pic.twitter.com/gZfosf3AuY

Bloomberg also operates his own company by importing immigrants. For example, MyVisJobs.com shows that he asked for almost 1,500 H-1B visa workers from 2017 to 2019 at an average wage of $160,000. 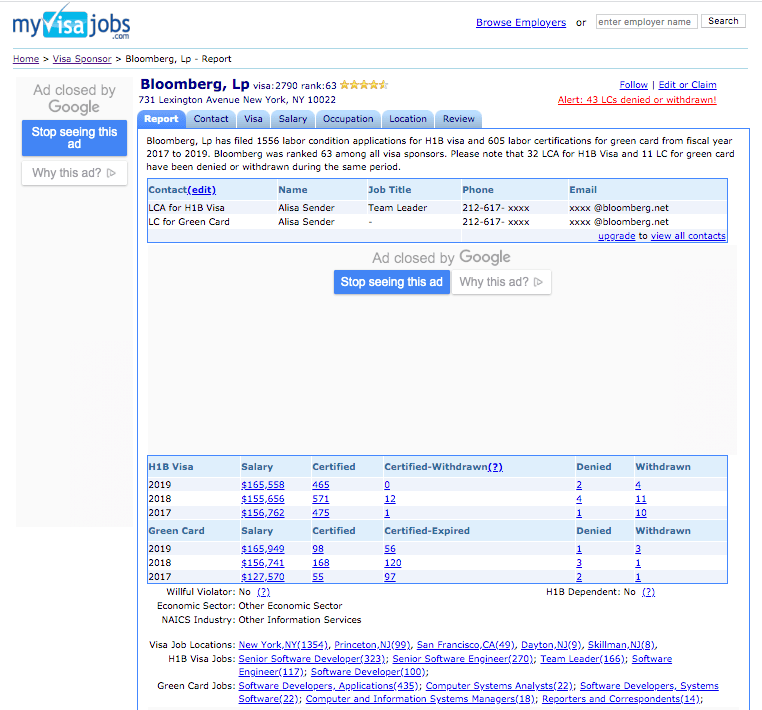 Bloomberg joined the 2020 race, in part, because Sen. Bernie Sanders took the lead in the Democratic polling. For Bloomberg, Sanders and President Donald Trump are the two extremes of American politics, while his elite, technocratic leadership is centrist:

We’ve tried socialism [in Russia], it doesn’t work, and I’ll leave you with a thought:

There was a guy, Bernie Sanders, who would have beaten Donald Trump. The polls showed he would have walked away with it. But Hillary Clinton got the nomination for a variety of reasons. What did [Sanders] stand for? He stood for something. He called it democratic socialism. And the young people — I don’t mean to knock young people, I wish I was one again — but, young people listen to Donald Trump, or to Bernie Sanders, and they said, “Yeah, democratic, that’s good. Socialism? Yeah, that’s that social media stuff.” Because our kids no longer learn civics in school, they no longer study Western history, they no longer read Western literature.

We are trying to change and dumb down the [eduction] system. And if you don’t know what happened in the past, you’re going to have to re-live it. It’s unfortunate but true, and I think it’s very dangerous. The world we’re going into, you see both the left and the right coming up here, and the middle is getting — unfortunately — not listened to anymore, and the extremists are going to shape the political culture if we’re not careful going forward.

And we’ve had extremism before, particularly on this [European] continent. It didn’t work out very well.

The view of Bloomberg, as a centrist — not an elite, globalist, technocrat investor — is widely shared by the establishment media that refuses to examine the impact of mass migration on Americans’ careers and wealth.