Lebanese officials said on Wednesday the massive explosion that rocked Beirut on Tuesday occurred when a large cargo of ammonium nitrate seized from a ship in 2013 and left in a warehouse in the Port of Beirut for six years caught fire and exploded.

International media organizations checked maritime records and concluded the ship in question was a Russian vessel bound for Mozambique impounded for technical issues when it stopped at Beirut almost seven years ago.

With over 100 dead and thousands injured, this least sinister of theories for the calamity could still be enough to bring down the unstable Lebanese government.

According to Lebanese Interior Minister Mohammed Fahmi, the 2,700 tons of ammonium nitrate was taken from a cargo ship and kept in storage ever since.

Radio Free Europe (RFE) deduced this must be a reference to the MV Rhosus, a ship owned by Russian businessman Igor Grechushkin impounded by Lebanese officials in 2013 because the ship was suffering technical problems when it entered the Port of Beirut. It was reportedly sailing under a Moldovan flag with a mostly Ukrainian crew at the time.

Other sources report the ship sailed from Georgia (in eastern Europe) and was bound for Mozambique when it docked in Beirut.

The onetime captain of the Rhosus, Boris Prokoshev, confirmed to RFE that his former ship was the likely source of the confiscated fertilizer cargo.

Prokoshev said he and the crew ended up stranded in Lebanon because Grechuskhkin stopped paying their salaries or fees for operating the ship, which evidently prompted Lebanese officials to seize the cargo. The former captain strongly criticized the Lebanese government for failing to take proper safety measures for the dangerous fertilizer and for leaving it to rot in storage long after Grechushkin lost interest in his seized cargo.

As for the fire that detonated the six-year-old stash of ammonium nitrate, Lebanese media reported on Wednesday that welders working to repair a breach in the walls of the warehouse might have inadvertently sparked the blaze. The precise cause of the smaller detonations visible in the burning port district before the apocalyptic blast that horrified the world is still under investigation. 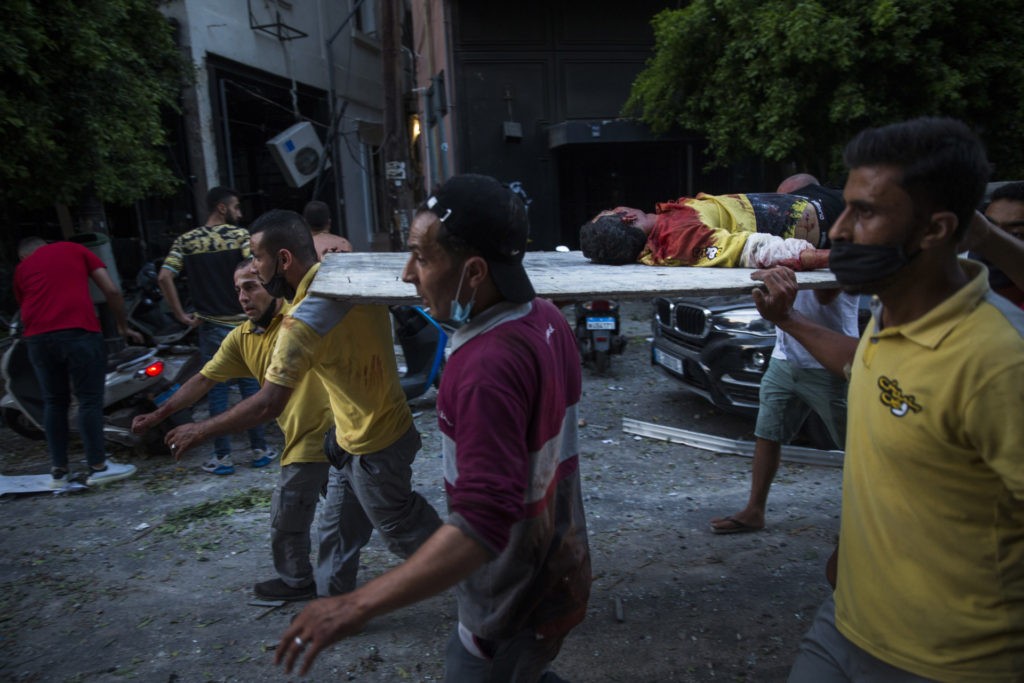 An injured man is carried on a piece of wood after a large explosion on August 4, 2020 in Beirut, Lebanon. Video shared on social media showed a structure fire near the port of Beirut followed by a second massive explosion, which damaged surrounding buildings and injured hundreds. (Daniel Carde/Getty Images)

The Crimean Maritime Bulletin on Wednesday confirmed the details about MV Rhosus and its cargo, elaborating that Lebanese officials impounded the ship because it failed safety inspections and prevented the crew from returning home because they were afraid they would be “left with an abandoned vessel on their hands, loaded with dangerous cargo,” a fear that evidently came true.

The Maritime Bulletin’s sources expressed some confusion as to why the Lebanese government did not seize the vessel and man it with a temporary crew. The ultimate fate of the ship was uncertain as of Wednesday morning, as some eyewitnesses claim to have seen a burning ship in the Beirut harbor on Tuesday that might have been the Rhosus, but former captain Prokoshev said it eventually sailed out of Beirut and sank years ago due to poor maintenance.

Reuters quoted sources at the Port of Beirut on Wednesday who blamed sheer “negligence” for leaving the ammonium nitrate stored unsafely in a warehouse for six years, despite prescient warnings it could “blow up all of Beirut” if it should ever catch on fire. In the event, the explosion on Tuesday was not only powerful enough to severely damage the Port of Beirut and the entire city, it actually changed the coastline.

The general manager of the port and Lebanon’s customs director both said the cargo was kept at the warehouse under a court order despite requests for it to be “re-exported” and a general understanding that the substance was dangerous.

“We requested that it be re-exported but that did not happen. We leave it to the experts and those concerned to determine why,” customs director Badri Daher told local media, pointing the first of what is certain to be many fingers as Lebanon’s unsteady government attempts to distribute blame for the incident.

Reuters discovered four documented requests for re-export of the material on the grounds that its presence endangered the safety of the port, one filed each year between 2015 and 2017.

The Siberian Times on Wednesday published photos from 2014 showing crew aboard the Rhosus using signs to plead with Lebanese authorities to let them go home. The article said Igor Grechushkin declared bankruptcy soon after the Rhosus was seized and currently lives in Cyprus with his wife, while their son attends a university in Scotland. Grechushkin has thus far declined requests to be interviewed about the Beirut explosion.