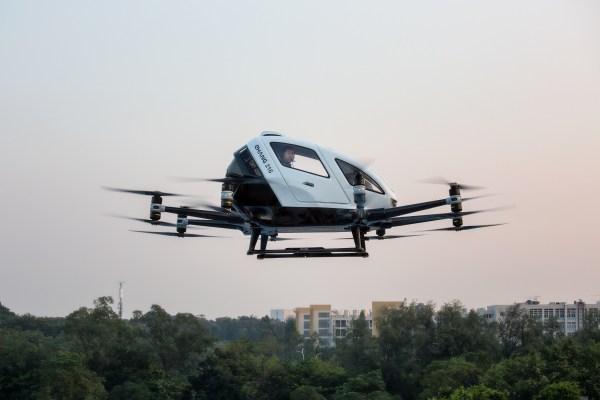 China’s EHang, a company focused on developing and deploying autonomous passenger and freight low-altitude vehicles, will build out its first operational network of air taxis and transports in Guangzhou. The company announced that the Chinese city would play host to its pilot location for a citywide deployment.

The pilot will focus on not only showing that a low-altitude, rotor-powered aircraft makes sense for use in cities, but that a whole network of them can operate autonomously in concert, controlled and monitored by a central traffic management hub that Ehang will develop together with the local Guangzhou government.

Ehang, which was chosen at the beginning of this year by China’s Civil Aviation Administration as the sole pilot company to be able to build out autonomous flying passenger vehicle services, has already demonstrated flights of its Ehang 184 vehicles carrying passengers in Vienna earlier this year, and ran a number of flights in Guangzhou in 2018 as well.

In addition to developing the air traffic control system to ensure that these operate safely as a fleet working in the air above city at the same time, Ehang will be working with Guangzhou to build out the infrastructure needed to operate the network. The plan for the pilot is to use the initial stages to continue to test out the vehicles, as well as the vertiports it’ll need to support their operation, and then it’ll work with commercial partners for good transportation first.

The benefits of such a network will be especially valuable for cities like Guangzhou, where rapid growth has led to plenty of traffic and high density at the ground level. It could also potentially have advantages over a network of autonomous cars or wheeled vehicles, since those still have to contend with ground traffic, pedestrians, cyclists and other vehicles in order to operate, while the low-altitude air above a city is more or less unoccupied.