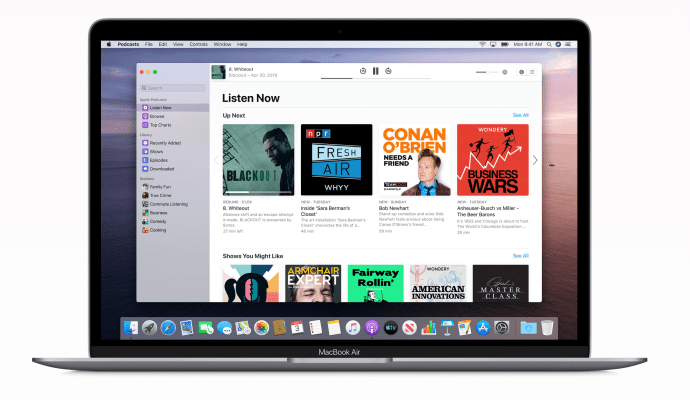 Apple is said to be planning to bankroll the creation of original podcasts from third-parties that it will offer exclusively on its own streaming services, Bloomberg reports. The report says that Apple’s plans to land podcast exclusives will help the company compete with similar offerings from streaming rivals including Spotify and Sticher, both of which are funding exclusive podcast content, and in some cases, wholly original shows to run on their own streaming audio offerings.

The report says that Apple execs have been reaching out to media companies that produce audio content to talk about the possibility of buying exclusive rights to some podcasts, albeit in a “preliminary” way, which suggests that this plan may be in the very early stages. It seems unlikely, then, that we would see any kind of Apple exclusive original podcast content ahead of other media efforts soon to launch from the company, including its Apple TV+ subscription video service coming this fall.

Apple has recently made a number of improvements to its podcast product offerings, both on the consumer and the creator side, including more detailed analytics for podcasters, and a full-fledged standalone Podcasts app for its macOS computers, which is launching alongside macOS Catalina this fall. Still, it’s largely been hands-off when it comes to content, aside from informally meeting with podcasters on occasion and sharing best practices.

Meanwhile, Spotify in particular has been especially aggressive about acquiring its own podcast media companies, including Gimlet, which makes popular podcast ‘Reply All”; Anchor, which creates podcast making tools for publishing and monetization; and Parcast, another podcast creation network with a deep library of true-life and other content.

Apple still enjoys a strong majority of audience when it comes to overall podcast listenership by all accounts, but Spotify is definitely chipping away by focusing effort and investment both on the product and on the content side. Apple considering funding content of its own definitely makes sense given its tactics in video, and the changed landscape of the podcast business.