Amazon introduces the Amazon One, a way to pay with your palm when entering stores 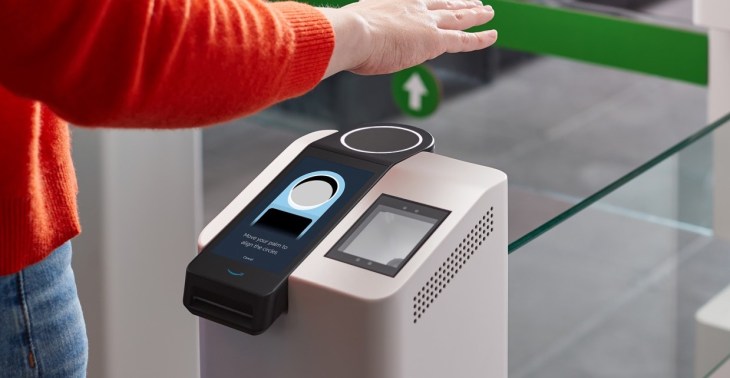 In the middle of a pandemic when customers are often wearing plastic gloves to stores alongside their face masks, Amazon’s physical retail team is introducing a new biometric device that will allow shoppers to pay at Amazon Go stores using their palm. The company on Tuesday introduced its purportedly “contactless” Amazon One, a scanner of sorts where you’ll first insert your credit card, then hover your palm over the device to associate your palm signature with your payment mechanism. Once your card is on file, you’ll be able to enter the store in the future just by holding your palm above the Amazon One device for a second or so.

While you’re not actually supposed to press your palm down on the device itself, it’s a new technology that will require user education — and that could be a problem, at least in the short-term.

Today, consumers are familiar with the idea of pressing down a finger to unlock an iPhone with TouchID, for example, or using a thumbprint to open a secure lock. It’s likely that many will assume you are to also mash your palm down on Amazon One’s flat surface, too.

At any other time, that wouldn’t be much of a concern. But given that the device is being introduced in the U.S. which is still dealing with the COVID-19 health crisis, now may not be the best time to put another potential touchpoint at a store’s entry.

Amazon, of course, stresses that the device is “contactless” which is something customers will appreciate. But unless store staff stands at the entry wiping the device regularly, it will likely be touched a lot as customers get up to speed on how exactly the thing works. Eventually, the Amazon One may achieve the goal of being “contactless.” But in the meantime, the device should be staffed, wiped and demonstrated to everyone who walks in.

Amazon says the new device uses computer vision technology in real-time to create the unique palm signature — a choice the company made because it believes palm recognition is more private that some other means of biometric authentication. That is, you can’t determine someone’s identity just by looking at the image of their palm, Amazon says. That may be true, but given that the palm signature is associated with a payment card, it’s more important that the data is secured rather than how recognizable the palm image is.

Amazon also says the images are encrypted and sent to a secure area in the cloud where customers’ palm signatures are created.

The device doesn’t require you to have Amazon account to enter the store — just a palm and phone number — but customers can associate their account to see their usage history on the Amazon website. They can also add a second palm print, if they choose.

The Amazon One is being trialed at two Seattle-area stores, including the original Amazon Go store at 7th & Blanchard and the store in South Lake Union at 300 Boren Ave. North. It won’t replace the other ways to enter the stores, however. Customers can still enter using the Amazon Go app, Amazon app, or with associate assistance if they want to pay in cash.

The Amazon One doesn’t have to be used only for entry to retail stores, the company notes. It envisions the device being used by third-parties including stadiums and office buildings, as well as other non-Amazon retailers.

Amazon says discussions are underway with some interested parties, but it has nothing to announce at this time. It’s unclear to what extent a third-party retailer would trust Amazon to host its customer transaction data, however, given Amazon’s history in using third-party data in an anti-competitive fashion.