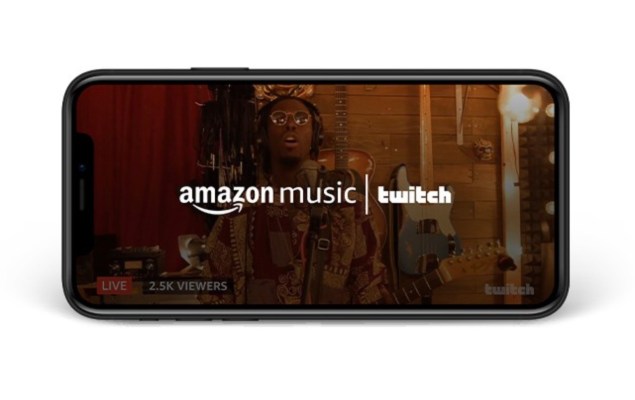 Amazon is leveraging its investment in live-streaming site Twitch to expand its Amazon Music service. The company announced this morning Twitch’s livestreams will now be available in the Amazon Music app on iOS and Android, with the goal of allowing fans and artists to connect amid a pandemic where in-person concerts have been cancelled.

Since the COVID-19 health crisis has shut down live events, online platforms have stepped in to fill the void. Artists are connecting with and streaming to fans through social media and streaming platforms like Twitch, TikTok, Facebook and Instagram Live, and others.

Twitch, in particular, has increasingly catered to musicians and other creatives during the pandemic. The company earlier this year held a benefit, Stream Aid, which featured music, and has hosted a flood of other artists’ live streams in the months since. According to a report by StreamElements, Twitch grew 56% in hours watched in Q2 2020 compared with Q1, passing the 5 billion mark, due to the increase in online entertainment.

Amazon is not alone in seeing potential in the live events market. Spotify is also developing a virtual events platform, expected to launch soon. And YouTube touts its concert footage and live performances as a reason to sign up for its YouTube Music Premium service.

With the Amazon Music partnership now live, fans will be able to begin interacting with artists across genres who are planning on live streaming to Twitch in the coming days. Some of these streams will be live music while others will be music-related content, like artist interviews or variety shows.

Through Twitch’s partnership with Bandsintown, artists can fast-track to Twitch Affiliate status, giving them access to monetization tools for their livesteams. Fans on Twitch can pay to subscribe to premium channels or leave virtual tips.

Despite the monetization capabilities of today’s livesteaming platforms, they’re not a replacement for live events for most artists, given the average rate for virtual concert ticket sales. According to data from virtual concert platform StageIt, reported by Billboard, fans were paying just $3.75, on average, for a 30-minute livestream in 2011. This has now grown to $16.50. (There are exceptions, like BTS, who pulled in a record $20 million for their virtual show, but this is not the norm.) In most cases, platforms helping helping musical artists weather the pandemic, but do not replace make up for all lost revenues.