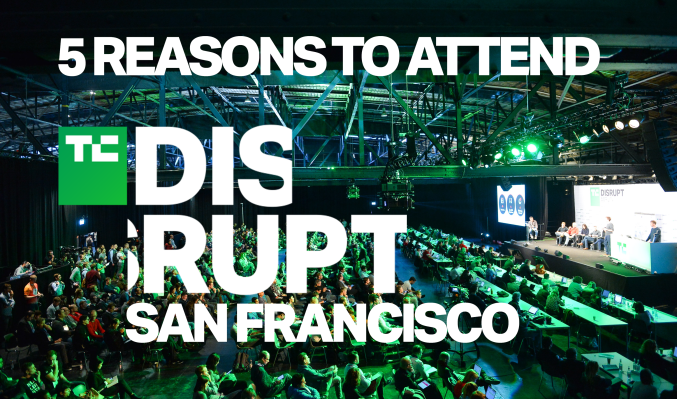 In little more than three weeks, San Francisco will be all aglow with TechCrunch’s Disrupt SF (October 2-4) at the Moscone Center. If you’re a part of the startup scene, or plan to be, there is a long list of reasons why you should join the event. (And there is a pass priced for most every pocketbook!) Here are five reasons why:

#1 The people you’ll meet.  At nearly 8,000 attendees last year, Disrupt SF was TechCrunch’s biggest event ever but thanks to the CrunchMatch platform for attendees, meeting a potential (and relevant) investor, founder, employer or business partner is never more than a few taps away. Last year, CrunchMatch delivered almost 1400 1:1 meetings alongside tons of organic networking that happened on the show floor and during sessions.

#2 Watch, Work, Network. With the two Disrupt stages running concurrently, there’s always lots of content to take in – check out the agenda here. Pick your sessions, then take a break to take that call or tackle the inbox in one of the many comfy seating areas around the floor. Need a quiet place to take a meeting? There are several semi-private meeting rooms you can book. Stretch your legs in Startup Alley, where hundreds of startups are arrayed in categories, including ecommerce, SaaS, robotics and biotech, or line-up a few meetings through CrunchMatch. Days at Disrupt are guaranteed to be some of your most productive days this year.

#3 The Speakers. No matter your angle on the startup scene, TechCrunch’s editors have have produced an impossible (and highly diverse) speaker line-up.

#4 Startup Battlefield. TechCrunch’s signature startup competition brings to the big stage 20 incredible early stage companies that you’ve never seen before. The company names are under wraps until the end of the show but there’s a reason why Ashton Kutcher, Marissa Mayer, Alfred Lin (Sequoia), Ann Miura-Ko (Floodgate), and Mamoon Hamid (KPCB) were eager to step in as finals judges. The 857 contestants to date have pulled in $8.9 billion and produced 111 exits. That Cloudflare IPO this week? They launched at TechCrunch Disrupt in 2011 at Startup Battield.

We know that’s a lot but it’s just the start. Disrupt SF is one tech-focused startup event you have to experience in person. Don’t want for the FOMO to hit and get your passes to attend Disrupt SF this October.